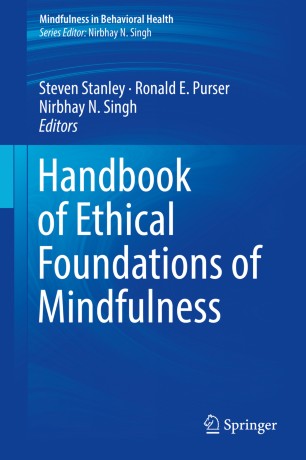 Handbook of Ethical Foundations of Mindfulness

Part of the Mindfulness in Behavioral Health book series (MIBH)

Topics featured in this handbook include:

· Mindfulness as the true foundation of a naturally ethical life.

·  Mindfulness and its impact on emotional life, interpersonal relationships, and forgiveness.

·  How Buddhist ethics informs spiritual practice across the three main vehicles (yanas) of Buddhism and its relation to mindfulness.

·  “McMindfulness”, or the mass marketization and commodification of mindfulness-based interventions (MBIs).

·  How an ethic of interdependence formed by Buddhist principles and mindfulness practices can help address the environmental crisis.

The Handbook of Ethical Foundations of Mindfulness is a must-have resource for researchers, clinicians/professionals, and graduate students in psychology, complementary and alternative medicine, and social work as well as occupational and rehabilitation therapy, nursing, philosophy, business management, and teachers of Buddhism and meditation.

Steven Stanley, Ph.D. is a Lecturer in the School of Social Sciences at Cardiff University (Wales, UK). A critical psychologist interested in the qualitative study of social life in capitalism, he has investigated historical changes in meanings of mindfulness and meditation, ethics and politics of the mindfulness movement, and mindfulness meditation as a psychosocial research methodology. His articles have appeared in journals such as Theory & Psychology, Qualitative Research in Psychology and New Ideas in Psychology. His current research comprises discourse analysis of interaction in mindfulness courses and is titled, Constructing the mindful subject: reshaping experience through Mindfulness-Based Stress Reduction. Steven also teaches mindfulness as contemplative education and critical inquiry to sociology, social psychology, education, and social work students. He completed the Committed Dharma Practitioner Programme (Gaia House, Devon, UK) and Pali Summer School (Oxford Centre for Buddhist Studies, Oxford, UK).

Ronald Purser, Ph.D. is a professor of management at San Francisco State University. He is co-author of five books including, 24/7: Time and Temporality in the Network Society (Stanford University Press, 2007), and over 60 academic journal articles and book chapters. More recently, Professor Purser’s writings critically examine Buddhism’s encounter with modernity, capitalism and individualism, particularly in corporate settings. Dr. Purser began his Buddhist training beginning in 1981 at the Tibetan Nyingma Institute in Berkeley. In 1985, he was a student at the Cleveland Zen Center under Koshin Ogui Sensei who had been Shunryu Suzuki’s personal assistant in the early 1960’s. He has studied with numerous Zen teachers and Tibetan lamas, is now an ordained Dharma instructor in the Korean Zen Buddhist Taego order. His recent articles include White Privilege and the Mindfulness Movement, Confessions of a Mind-wandering MBSR Student: Remembering Social Amnesia; Clearing the Muddled Path of Traditional and Contemporary Mindfulness; Revisiting Mindfulness: A Buddhist-Based Conceptualization (with J. Milillo); Zen and the Art of Organizational Maintenance; Zen and the Creative Management of Dilemmas (with Albert Low); Deconstructing Lack: A Buddhist Perspective on Egocentric Organizations; and A Buddhist-Lacanian Perspective on Lack. His articles Beyond McMindfulness (with David Loy), Mindfulness’ Truthiness Problem (with Andrew Cooper), and Corporate Mindfulness Is Bullsh*t (with Edwin Ng) went viral in the Huffington Post and Salon.com in 2013, 2014 and 2015. He is co-editor of Handbook of Mindfulness: Culture, Content and Social Engagement published by Springer in 2017.

Nirbhay N. Singh, Ph.D., BCBA-D, is Clinical Professor of Psychiatry and Health Behavior at the Medical College of Georgia, Georgia Regents University, Augusta, Georgia, USA. Prior to his current appointment, he was a Professor of Psychiatry, Pediatrics and Psychology at the Virginia Commonwealth University School of Medicine and Director of the Commonwealth Institute for Family Studies, Richmond, Virginia. His research interests include mindfulness, behavioral and psychopharmacological treatments of individuals with disabilities, and assistive technology for supporting individuals with severe/profound and multiple disabilities. He has over 680 research publications, including 22 books. He is the Editor-in-Chief of three journals: Journal of Child and Family Studies, Mindfulness, and Advances in Neurodevelopmental Disorders, and Editor of three book series: Mindfulness in Behavioral Health, Evidence-based Practice in Behavioral Health, and Children and Families. He has had a life-long practice in meditation in the Soto Zen tradition, with additional training in other schools of meditation in both Hindu and Buddhist traditions. He is a co-editor of the book Buddhist Foundations of Mindfulness.