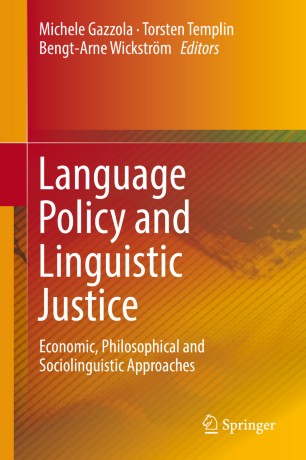 Language policies are increasingly acknowledged as being a necessary component of many decisions taken in the areas of the labor market, education, minority languages, mobility, and social inclusion of migrants. They can affect the democratic control of political organizations, and they can either entrench or reduce inequalities. These are the central topics of this book. Economists, philosophers, political scientists, and sociolinguists discuss – from an interdisciplinary perspective – the distributive socio-economic effects of language policies, their impact on justice and inequality at the national or international level, as well as the connection between language choices and an inclusive access to public services. The range of social and economic issues raised by linguistic diversity in contemporary societies is large, and this requires new approaches to tackle them. This book provides new input to design better, more efficient, and fair language policies in order to manage linguistic diversity in different areas.
Topics covered include: theoretical models of linguistic justice and linguistic disadvantage; the assessment of the socio-economic consequences of language policies; the evaluation of the costs, benefits, and degree of inclusion of language planning measures; the politics of migrants’ linguistic integration; as well as multilingualism and economic activities. These topics are discussed in different contexts, including the areas inhabited by linguistic minorities, cities receiving migrants, and supranational organizations.

​Michele Gazzola (1978) is a research fellow at Humboldt-Universität zu Berlin in the Research Group "Economics and Language", as well as a research fellow at the Institute for ethnic studies (Inštitut za narodnostna vprašanja) in Ljubljana, and a teaching fellow at the Università della Svizzera Italiana in Lugano. He is currently working on the research project Mobility and Inclusion in a Multilingual Europe (project MIME). His research areas include language policy and planning, the economics of languages, policy analysis, and multilingualism as a social phenomenon.
Torsten Templin (1986) is a research assistant at Humboldt-Universität zu Berlin. In 2012 he graduated in Mathematics. Since 2014 he is part of the EU financed MIME project (Mobility and Inclusion in a Multilingual Europe) and works on modeling the dynamics of language use and language policy evaluation. His research interests include language economics, applied mathematics and optimal control theory.
Bengt-Arne Wickström (1948) is guest professor at Andrássy University in Budapest. From 1992 until his retirement in 2013 he held the chair of public economics at Humboldt-Universität zu Berlin and before that chairs at Johannes-Kepler-Universität in Linz, Austria, and the University of Bergen, Norway. He is an honorary professor at Universidad de La Habana. His research is concentrated on economics and language, and he is currently (2014-2018) coordinating a research group working on the dynamics of language use as part of the EU-financed MIME project (Mobility and Inclusion in a Multilingual Europe) involving some 20 universities. In addition to language economics, his research interests include welfare economics, public-choice theory, and evolutionary approaches in economics.