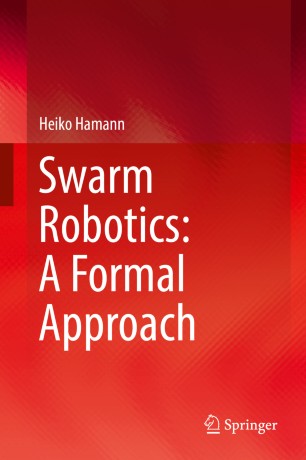 This book provides an introduction to Swarm Robotics, which is the application of methods from swarm intelligence to robotics. It goes on to present methods that allow readers to understand how to design large-scale robot systems by going through many example scenarios on topics such as aggregation, coordinated motion (flocking), task allocation, self-assembly, collective construction, and environmental monitoring. The author explains the methodology behind building multiple, simple robots and how the complexity emerges from the multiple interactions between these robots such that they are able to solve difficult tasks. The book can be used as a short textbook for specialized courses or as an introduction to Swarm Robotics for graduate students, researchers, and professionals who want a concise introduction to the field.

"Given the increasing number of sophisticated robots sharing our lives,
the study of how large number of robots, so-called robot swarms,
interact among themselves and with fellow humans to organize their
activities and perform ever more complex tasks is becoming of paramount
importance. With this book on swarm robotics, Heiko Hamann gives an
important contribution to the foundations of this exciting research field."

Heiko Hamann is Professor for Service Robotics at the University of Lübeck, Germany . His research focus is on swarm robotics, swarm intelligence, and evolutionary robotics. He is developing innovative methods to govern the ever-increasing complexity of engineered systems using novel applications of tools from physics, mathematics, chemistry, and biology. He has taught courses on swarm robotics, mobile robotics, and evolutionary robotics for more than five years. With more than 80 peer-reviewed publications at international conferences and international journals he is a well-recognized researcher in swarm robotics and related fields. He is the author of Space-Time Continuous Models of Swarm Robotic Systems (Springer, 2010), a frequently cited book on modeling systems of swarm robots. As coordinator and member of large European-funded research projects he worked on swarm robotics, modular robotics, and bio-hybrid systems.