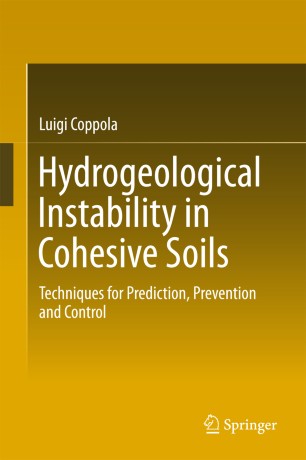 Techniques for Prediction, Prevention and Control

This book discusses techniques for predicting, preventing and controlling the hydrogeological instability of slopes consisting of cohesive soils. The proposed methodology is practical and innovative, and assumes a dynamic valence in defining the deformation process of underground failure as well as its activation through the assumption of a four-dimensional space-time continuum. This latter aspect is crucial for predicting a landslide in time to control it. At present, predicting, preventing and controlling hydrogeological instability in cohesive soils relies on mathematical modelling using specific software, the predictive reliability of which is rather deficient. Such modelling is based upon deterministic processes, which are entirely unsuitable for dealing with the complexity of vital processes occurring during the genesis of a landslide. In this work, the three-dimensional vision of a landslide as a set of distinct and independent phenomena is abandoned and the prediction and prevention of hydrogeological instability is pursued through the alternative of an indivisible totality of natural phenomena that includes the time factor. The book is of interest to graduates and researchers of applied geology, geotechnical, environmental and civil engineering, as well as professionals in the fields of hydrogeology and natural hazards.