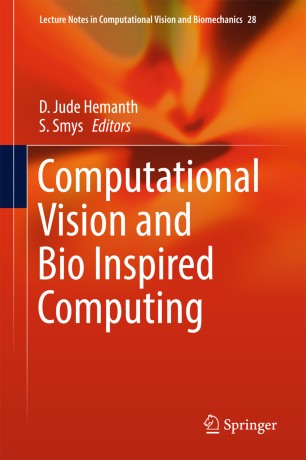 This is the proceedings of the International Conference On Computational Vision and Bio Inspired Computing (ICCVBIC 2017) held at RVS Technical Campus, September 21-22, 2017. It includes papers on state of the art innovations in bio-inspired computing applications, where new algorithms and results are produced and described. Additionally, this volume addresses evolutionary computation paradigms, artificial neural networks and biocomputing. It focuses mainly on research based on visual interference on the basis of biological images. Computation of data sources also plays a major role in routine day-to-day life for the purposes such as video transmission, wireless applications, fingerprint recognition and processing, big data intelligence, automation, human centric recognition systems. With the advantage of processing bio-inspired computations, a variety of computational paradigms can be processed. Finally, this book also treats the formation of neural networks by enabling local connectivity within it with the aid of vision sensing elements.

​Dr . D. Jude Hemanth received his B.E degree in ECE from Bharathiar University in 2002, M.E degree in communication systems from Anna University in 2006 and Ph.D. from Karunya University in 2013. His research areas include Computational Intelligence and Image processing. He has authored more than 100 research papers in reputed International Journals. He has authored 1 book with (VDM-Verlag, Germany) and many book chapters with reputed publishers such as Springer and Inderscience. He has been serving as Associate editor of IEEE Access Journal. He is also the guest editor of many journals with Springer, Inderscience, IOS Press, etc. He has been also the organizing committee member of several international conferences across the globe. He holds professional membership with IEEE Technical Committee on Neural Networks (IEEE Computational Intelligence Society) and IEEE Technical Committee on Soft Computing (IEEE Systems, Man and Cybernatics Society). He has completed 1 funded research project from CSIR, Govt. of India. He also serves as the “Research Scientist” of Computational Intelligence and Information Systems (CI2S) Lab, Argentina and RIADI Lab, Tunisia. Currently, he is working as Associate Professor in Department of ECE, Karunya University, Coimbatore, India.

Dr.S.Smys received his M.E and Ph.D degrees all in Wireless Communication and Networking from Anna University and Karunya University, India. His main area of research activity is localization and routing architecture in wireless networks. He is served as a reviewer for IET, Springer, Inderscience and Elsevier journals. He has published many research articles in refereed journals and IEEE conferences. He has been the General chair, Session Chair, TPC Chair and Panelist in several conferences. He is member of IEEE and senior member of IACSIT wireless research group. He serves as Associate Editor of Computers and Electrical Engineering (C&EE) journal, Elsevier and Guest Editor of Telecommunication system journal, Springer. He has been serving as Organizing Chair and Program Chair of several International conferences, and in the Program Committees of several International conferences. Currently he is working as a professor in the Department of Computer Science and Engineering at RVS Technical Campus, Coimbatore, India.