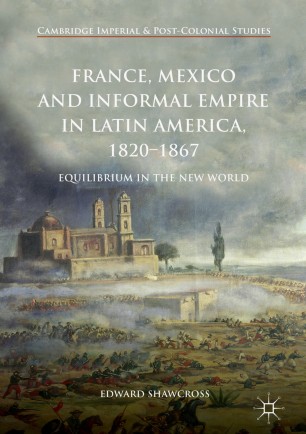 Equilibrium in the New World

This book explores French imperialism in Latin America in the nineteenth century, taking Mexico as a case study. The standard narrative of nineteenth-century imperialism in Latin America is one of US expansion and British informal influence. However, it was France, not Britain, which made the most concerted effort to counter US power through Louis-Napoléon’s military intervention in Mexico, begun in 1862, which created an empire on the North American continent under the Habsburg Archduke Ferdinand Maximilian. Despite its significance to French and Latin American history, this French imperial project is invariably described as an “illusion”, an “adventure” or a “mirage”. This book challenges these conclusions and places the French intervention in Mexico within the context of informal empire.  It analyses French and Mexican ideas about monarchy in Latin America; responses to US expansion and the development of anti-Americanism and pan-Latinism; the consolidation of Mexican conservatism; and, finally, the collaboration of some Mexican elites with French imperialism. An important dimension of the relationship between Mexico and France, explored in the book, is the transatlantic and transnational context in which it developed, where competing conceptions of Mexico and France as nations, the role of Europe and the United States in the Americas and the idea of Latin America itself were challenged and debated.

Edward Shawcross is an independent scholar based in London, UK. He recently completed an AHRC-funded PhD at University College London, UK. He is the author of an article on French imperialism in Latin America in the European History Quarterly.

“The book blends international, political, and intellectual history, and draws extensively and effectively from diplomatic archives in Paris, Mexico City, London and Austin, and Mexican and French newspapers and periodicals, among other sources. … this is a well-conceived book, full of rich detail, insightful analysis, and good narrative.” (Paul Edison, H-France Review, Vol. 18 (176), 2018)​
Buy options