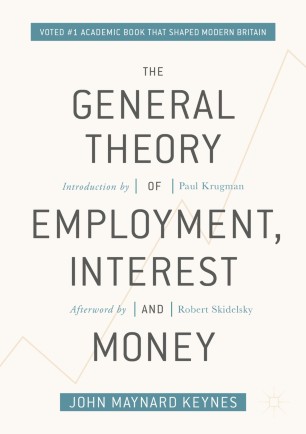 The General Theory of Employment, Interest, and Money

This book was originally published by Macmillan in 1936. It was voted the top Academic Book that Shaped Modern Britain by Academic Book Week (UK) in 2017, and in 2011 was placed on Time Magazine's top 100 non-fiction books written in English since 1923. Reissued with a fresh Introduction by the Nobel-prize winner Paul Krugman and a new Afterword by Keynes’ biographer Robert Skidelsky, this important work is made available to a new generation.

The General Theory of Employment, Interest and Money transformed economics and changed the face of modern macroeconomics. Keynes’ argument is based on the idea that the level of employment is not determined by the price of labour, but by the spending of money. It gave way to an entirely new approach where employment, inflation and the market economy are concerned.

Highly provocative at its time of publication, this book and Keynes’ theories continue to remain the subject of much support and praise, criticism and debate. Economists at any stage in their career will enjoy revisiting this treatise and observing the relevance of Keynes’ work in today’s contemporary climate.