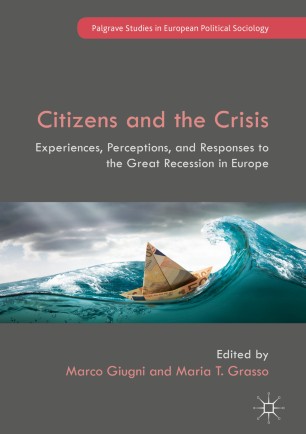 Citizens and the Crisis

Experiences, Perceptions, and Responses to the Great Recession in Europe

This volume presents evidence-based research on citizens’ experiences and reactions to the Great Recession in Europe. How did European citizen experience and react to the crisis? How are the experiences of crisis and political responses socially differentiated? Are some social classes and more deprived groups particularly hard hit? How did the crisis impact on political choices? What types of political action did citizens engage in and why? What were the drivers of populist attitudes and protest participation? This country-based book explores these important dynamics as expressed in diverse national contexts, namely France, Germany, Greece, Italy, Poland, Spain, Sweden, Switzerland, and UK. Each chapter focuses on one of these countries and employs data from the same survey fielded in 2015. This volume is of particular relevance for scholars, students, and practitioners interested in political sociology, comparative politics and European politics.

Marco Giugni is Professor at the Department of Political Science and International Relations and Director of the Institute of Citizenship Studies (InCite) at the University of Geneva, Switzerland. His research interests focus on social movements and protests, social exclusion and the participation of disadvantaged and discriminated groups, such as the unemployed and immigrants.

Maria T. Grasso is Professor at the Department of Politics, University of Sheffield, United Kingdom. She is the author of Generations, Political Participation and Social Change in Western Europe (2016) and co-editor of Austerity and Protest: Popular Contention in Times of Economic Crisis (with M. Giugni, 2015). Her research focuses on political sociology and political engagement.

“While the Great Recession is a global phenomenon, its forms and dynamics have varied cross-nationally, together with the social crisis that austerity policies have brought about. As a legitimacy crisis at the political level interacted with long-lasting economic recession, different groups of the population reacted in various ways—from political protests to electoral behaviours, from the prefiguration  of alternative ways of living to the elaboration of new ideas and knowledge. Reporting the results of a rich and rigorous empirical analysis covering nine European countries, this collected volume offers important evidence on the effects of the transformation of capitalism on citizens, but also on their agency in hard times.” (Professor Donatella della Porta, Scuola Normale Superiore, Italy)

“Based on an original and extensive survey carried out in nine countries in 2015, this collection of carefully crafted country studies explores the impact on the Great Recession on the lived experience as well as political attitudes and behavior of European citizens. Relative to existing literature on this topic, the volume is distinguished by its attention to the private sphere as well as the public sphere and by its attention to different forms of political participation. It is also distinguished by its attention to the specificities of each national context. By shedding light on important changes in citizens’ perceptions, attitudes and behavior, the volume contributes to our understanding of how the Great Recession prepared the ground for recent changes in the dynamics of national politics across Europe.” (Professor Jonas Pontusson, University of Geneva, Switzerland)