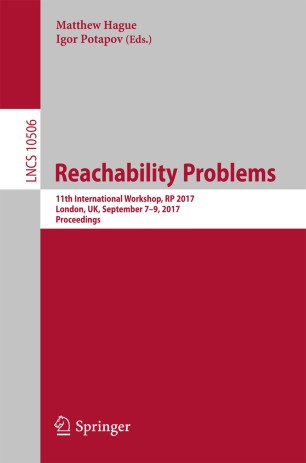 This book constitutes the refereed proceedings of the 11th International Workshop on Reachability Problems, RP 2017, held in London, UK, in September 2017. The 12 full papers presented together with 1 invited paper were carefully reviewed and selected from 17 submissions.
The aim of the conference is to bring together scholars from diverse fields with a shared interest in reachability problems, and to promote the exploration of new approaches for the modelling and analysis of computational processes by combining
mathematical, algorithmic, and computational techniques. Topics of interest include (but are not limited to): reachability for innite state systems; rewriting systems; reachability analysis in counter/timed/cellular/communicating automata; Petri nets; computational aspects of semigroups, groups, and rings; reachability in dynamical and hybrid systems; frontiers between decidable and undecidable reachability problems; complexity and decidability aspects; predictability in iterative maps, and new computational paradigms.