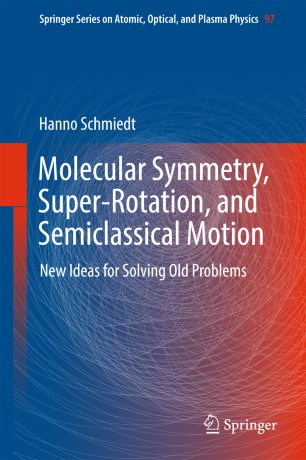 This book presents a range of fundamentally new approaches to solving problems involving traditional molecular models. Fundamental molecular symmetry is shown to open new avenues for describing molecular dynamics beyond standard perturbation techniques. Traditional concepts used to describe molecular dynamics are based on a few fundamental assumptions, the ball-and-stick picture of molecular structure and the respective perturbative treatment of different kinds of couplings between otherwise separate motions.  The book points out the conceptual limits of these models and, by focusing on the most essential idea of theoretical physics, namely symmetry, shows how to overcome those limits by introducing fundamentally new concepts.
The book begins with an introduction to molecular symmetry in general, followed by a discussion of nuclear spin symmetry. Here, a new correlation between identical particle exchange and spin angular momentum symmetry of nuclei is exhibited. The central part of the book is the discussion of extremely floppy molecules, which are not describable in the framework of traditional theories. The book introduces a fundamentally new approach to describing the molecular dynamics of these molecules - the super-rotor model, which is based on a five-dimensional symmetry that has never been observed in molecules before. By applying the super-rotor theory to the prototype of floppy molecules, protonated methane, this model can consistently predict the symmetry and energy of low-energy states, which were characterized experimentally only a few years ago. The theoretical predictions agree with the experimental results, which makes the prospect of further developing the super-rotor theory and applying it to other molecules a promising one. In the final section, the book also covers the topic of ultrafast rotations, where usual quantum calculations reach their natural limits. A semi-classical method for determining rotational energies, developed in the early 1990s, is shown to be attachable to quantum calculations of the vibrational states. This new combined method is suitable for efficiently calculating ro-vibrational energies, even for molecular states with large angular momentum.