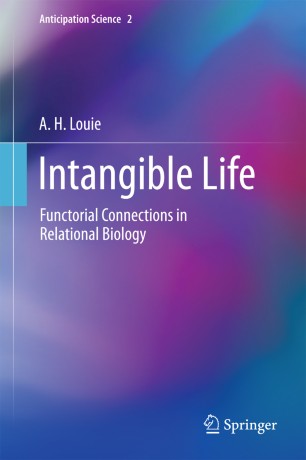 This rare publication continues an exploratory journey in relational biology, a study of biology in terms of the organization of networked connections in living systems. It builds on the author’s two earlier monographs which looked at the epistemology of life and the ontogeny of life. Here the emphasis is on the intangibility of life, that the real nature of living systems is conveyed not by their tangible material basis but by their intangible inherent processes.
Relational biology is the approach that hails ‘function dictates structure’; it is mathematics decoded into biological realizations. Therefore, the work begins with a concise introduction to category theory, equiping the reader with the mathematical metalanguage of relation biology. The book is organized around three parts:
Part I is a comprehensive study of the most important functor in relational biology, the power set functor.  The author
lays the set-theoretic foundations of the functorial connections in relational biology, exploring relations, mappings, and set-valued mappings.
In Part II, Natural Law receives a new mathematical formulation founded on two axioms: ‘Everything is a set.’ and ‘Every process is a set-valued mapping.’ The reader sees how Metabolism–Repair networks, equipped with set-valued processors, expand their role from models of biological entities to generic models of all natural systems.
Part III expounds the various shades of invertibility in general, and the inversion of encoding to decoding in particular.  A plethora of mathematical and biological examples illustrate the category-theoretic concepts of equivalence and adjunction.
This book's algebraic approach to biological models will appeal to researchers and graduate students in mathematics, biology, and the philosophy of science.

Aloisius H. Louie is a mathematical biologist, whose research areas have encompassed abstract formulations, mathematical modelling, and computer simulations of various natural and physical phenomena, including the dynamic behaviour of protein molecules, enzyme-substrate recognition, processes of irreversible thermodynamics, human-pollutant interactions, the cell biology of senescence, and electromagnetics.  His premier interest, however, remains the epistemological aspects of mathematical biology.  He is glad to have returned to it in 2005 as an independent scholar with no academic affiliations, after a twenty-year interlude of doing mathematical modelling as a scientist-for-hire.  His approach to the subject is called ‘relational biology’, in keeping with the school pioneered by Nicolas Rashevsky and Robert Rosen.  He has thus far published two books on the subject: More Than Life Itself: A Synthetic Continuation in Relation Biology [ontos 2009] and The Reflection of Life: Functional Entailment and Imminence in Relational Biology [Springer 2013].  Intangible Life: Functorial Connections in Relational Biology now represents ‘episode 3’.