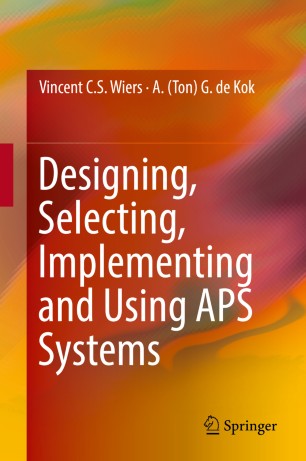 Commercial advanced planning and scheduling (APS) systems have been around for about 25 years and have seen widespread adoption in a variety of companies. The promises made by APS system implementations are high, and at the same time, APS projects are complex, costly, and carry a significant risk of failure. There is a great need for guidance on how to successfully implement APS systems, which is why this book was written.
In this book, we aim to discuss all facets of APS implementation, from theoretical background to definition, vendor selection, system design and the implementation process. In addition, this book helps readers understand how the underlying concepts were formed, why a concept will work in practice, and when it will not.
The contents of this book are based on many years of academic research and APS implementation experience. It draws together theory and practice in production control and explains how theories can be applied to support planning and scheduling processes in practice. This book will help anyone involved in  APS implementations to achieve success: human planners generate better plans than before, using the APS.

Vincent C. S. Wiers (Schiedam, 1969) graduated as an Industrial Engineer from the Eindhoven University of Technology (EUT) in 1993. He started a PhD project at the same university in the department of Industrial Engineering and completed the project in 1997 with a thesis on the Human Factor in Production Control. Subsequently, he started working at Bolesian/Cap Gemini, focussing on knowledge based technology, supply chain management and advanced planning & scheduling (APS). In 2000 he joined CMG, where he carried out several projects in the field of supply chain management. In 2001, he also re-joined EUT as a researcher.

In 2003, he started his own consultancy company Twinlog, focussing on the implementation of APS systems. Since 2003, Vincent Wiers has carried out over 40 APS projects. He has implemented planning systems for companies producing metals, chemicals, meat, packaging materials, electronics, carpets, automotive components, tobacco, and companies focussing on transportation, outside broadcasting, rail maintenance, port operations, and others. Apart from implementation projects, Vincent has designed functional architectures, carried out software selection projects, and carried out studies to redesign production control structures and processes. His projects were located in Europe, North-America, Asia and Africa.

In September 2004, his former Cap Gemini colleague Erik Maas joined Twinlog as a partner and worked together with Vincent Wiers for almost 10 years. On July 17th, 2014, Erik stepped on board of flight MH17 heading for Kuala Lumpur, and his life ended a few hours later. Vincent Wiers continued his work for Twinlog alone.

The first book co-authored by Vincent Wiers appeared in 2004, which was on Practical Production Control, and written together with Prof Ken McKay. It was translated into Japanese and Russian. He participated in the research network on Human and Organisational Factors in Industrial Planning and Scheduling (HOPS). His research was done together mainly with Prof Jan C. Fransoo. In 2011, Vincent Wiers was appointed Industrial Fellow at Eindhoven University of Technology (EUT). Together with Prof Ton de Kok, he started up a course on APS. In 2015, another book by Ken McKay and Vincent Wiers appeared, on Manufacturing Excellence.

Vincent Wiers has published about 16 journal papers and 5 book chapters. He has written numerous columns for Dutch professional magazines, websites and social media groups. His main research focus is the human factor in production control and the use of decision support systems for production control tasks.

Vincent Wiers is married and has one daughter and two sons. He lives in Eindhoven.

Ton de Kok graduated at the Rijksuniversiteit Leiden, The Netherlands in Mathematics and Economics in 1981. After 4 years under the supervision of prof. Henk C. Tijms he attained the doctorate (Ph.D. degree) in 1985 from the Free University of Amsterdam. Thereafter he joined the  Centre for Quantitative Methods (CQM) of Philips Electronics in Eindhoven, The Netherlands as consultant in Operations Research. During 5 years he participated in over 20 client projects in the field of logistics and production management. In 1990 he became Certified Fellow in Production and Inventory Management (CFPIM) of the American Production and Inventory Control Society (APICS). From 1990-1992 he was a teaching professor at Boston University Brussels. In 1990 he was appointed Manager Logistics Innovation of Philips Consumer Electronics.  In 1991 he was appointed part-time professor in Industrial Mathematics at Technische Universiteit Eindhoven. Since 1992 he is a full time professor Operations Management at the same university. He has published over 85 articles in international scientific journals. He is the Director of the European Supply Chain Forum (eSCF). He was a member of the board of VLM (Logistics Management Association) from 1997-2000. From January 1, 2003 till July 1, 2008 he was Scientific Director of the research school Beta. In 2004 he was Edelman Award Finalist as member of the Philips Semiconductors team. In 2006 he received the ISIR Service Award. In September 2008 Ton de Kok became Fellow of the research school Beta. In August 2014 he was granted the honor of being appointed as Fellow of the International Society for Inventory Research (ISIR). He is Academic Director of the TiasNimbas Executive Master on Operational Excellence and member of the TiasNimbas Academic Council. He has been invited for guest lectures at a multitude of US top schools. Recently he was keynote speaker at StochMod 2014 in Mannheim, ILS 2012 in Quebec, Mostly OM 2012 in Beijing, MSOM 2010 in Haifa, ORSIS 2009 in Tel Aviv, and GOR 2008 in Augsburg. Ton de Kok was head of the capacity group Operations Planning, Accounting, and Control (OPAC) in the department of Industrial Engineering and Innovation Sciences from April 1, 2008 to July 1, 2014. In 2006 he established the supply chain optimization software company ChainScope and is currently CTO.

Ton’s main research areas are Supply Chain Management and Concurrent Engineering with emphasis on quantitative analysis. His research results have been successfully tested and implemented in a multitude of projects with industry. For the next 5 years his research focus is on SCM in Configure-To-Order supply chains and SCM in process industry.

Ton is married, has a son and two daughters and lives in Bergeijk, close to Eindhoven.