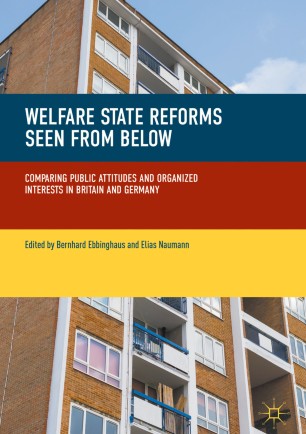 Welfare State Reforms Seen from Below

Comparing Public Attitudes and Organized Interests in Britain and Germany

Studying the political economy of welfare state reform, this edited collection focuses on the role of public opinion and organized interests in respect to policy change. It highlights that welfare states are hard pressed to reform in order to cope with ongoing socio-economic and demographic challenges. While public opinion is commonly seen to oppose welfare cuts and organized interests such as trade unions have tended to defend acquired social rights, this book shows that there have been emergent tendencies in favour of reform.

Welfare State Reforms Seen from Below analyses a wide range of social policies affecting healthcare, pensions and the labour market to demonstrate how social groups and interest organizations differ and interact in their approaches to reform. Comparing Britain and Germany, with its two very different welfare states, it provides a European perspective on the changing approaches to welfare.

This book will be of interest to those wanting to learn more about the politics of the welfare state and of relevance to students and academics in the fields of political economy and comparative social policy.

Elias Naumann is Post-Doctoral Researcher at the Collaborative Research Center SFB 884 “Political Economy of Reforms” at the University of Mannheim, Germany. His research interests include comparative welfare state research, public opinion and experimental methods in the social sciences.