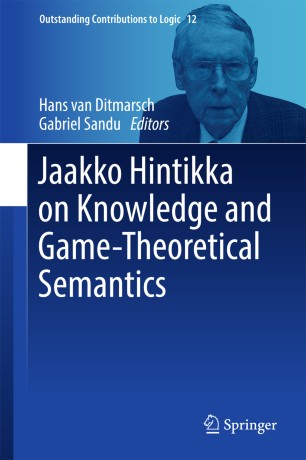 This book focuses on the game-theoretical semantics and epistemic logic of Jaakko Hintikka.

Hintikka was a prodigious and esteemed philosopher and logician, and his death in August 2015 was a huge loss to the philosophical community. This book, whose chapters have been in preparation for several years, is dedicated to the work of Jaako Hintikka, and to his memory.

This edited volume consists of 23 contributions from leading logicians and philosophers, who discuss themes that span across the entire range of Hintikka’s career. Semantic Representationalism, Logical Dialogues, Knowledge and Epistemic logic are among some of the topics covered in this book's chapters.

The book should appeal to students, scholars and teachers who wish to explore the philosophy of Jaako Hintikka.

Hans van Ditmarsch has been a senior researcher at the CNRS (the French national organization for scientific research) since 2012 and is based at LORIA (Laboratoire Lorrain de Recherche en Informatique et ses Applications) in Nancy. He is also an associated researcher at the IMSc (Institute of Mathematical Sciences), Chennai. His research focuses on the dynamics of knowledge, information-based security protocols, modal logics for belief revision, proof tools for epistemic logics, combinatorics, and computer and information science education.

Gabriel Sandu has been a professor of philosophy at the University of Helsinki since 1998, and is also a professor of philosophy at the Sorbonne University of Paris (Paris 1). His research chiefly concerns theories of truth, dependence and independence between quantifiers, and the application of game-theoretical methods to the study of formal languages that extend ordinary first-order languages (IF languages). This work, pursued in collaboration with Professor Jaakko Hintikka, challenges the universalist conception of logic and language, according to which one cannot express semantic relations in one and the same language. The most recent focus has been on importing concepts from classical game theory (Nash equilibria) into logic. The resulting notions of truth and logical consequence have led to Nash equilibrium semantics.