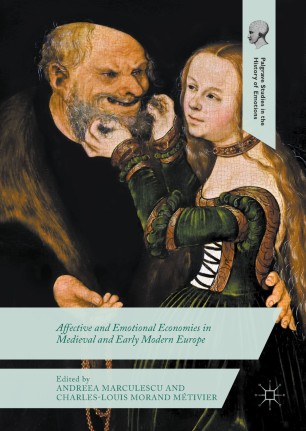 Affective and Emotional Economies in Medieval and Early Modern Europe

This book analyzes how acts of feeling at a discursive, somatic, and rhetorical level were theorized and practiced in multiple medieval and early-modern sources (literary, medical, theological, and archival). It covers a large chronological and geographical span from eleventh-century France, to fifteenth-century Iberia and England, and ending with seventeenth-century Jesuit meditative literature. Essays in this book explore how particular emotional norms belonging to different socio-cultural communities (courtly, academic, urban elites) were subverted or re-shaped; engage with the study of emotions as sudden, but impactful, bursts of sensory experience and feelings; and analyze how emotions are filtered and negotiated through the prism of literary texts and the socio-political status of their authors.

Andreea Marculescu is Lecturer in Women’s and Gender Studies at the University of Oklahoma, USA.

Charles-Louis Morand Métivier is Assistant Professor of French at the University of Vermont, USA.

“This volume is a panorama of current scholarship in several subjects that have been impacted by the history of emotions. Its theoretical and disciplinary scope, as well as its geographical and chronological remit, is impressive. This collection will appeal particularly to those interested in the history of emotions, affect and somatic responses, in the late mediaeval and early modern period, especially with respect to the exercise of power and responses to trauma.” (Luc Racaut, Lecturer in History, Newcastle University, UK)
Buy options