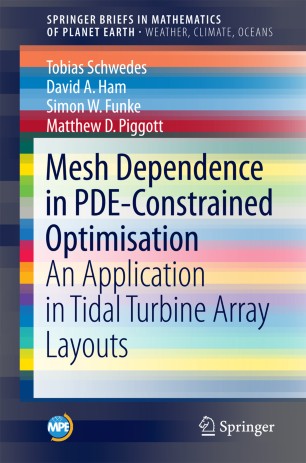 Part of the Mathematics of Planet Earth book series (MPE)

This book provides an introduction to PDE-constrained optimisation using finite elements and the adjoint approach. The practical impact of the mathematical insights presented here are demonstrated using the realistic scenario of the optimal placement of marine power turbines, thereby illustrating the real-world relevance of best-practice Hilbert space aware approaches to PDE-constrained optimisation problems.

Many optimisation problems that arise in a real-world context are constrained by partial differential equations (PDEs). That is, the system whose configuration is to be optimised follows physical laws given by PDEs. This book describes general Hilbert space formulations of optimisation algorithms, thereby facilitating optimisations whose controls are functions of space. It demonstrates the importance of methods that respect the Hilbert space structure of the problem by analysing the mathematical drawbacks of failing to do so. The approaches considered are illustrated using the optimisation problem arising in tidal array layouts mentioned above.

This book will be useful to readers from engineering, computer science, mathematics and physics backgrounds interested in PDE-constrained optimisation and their real-world applications.

“The book is quite an interesting supplementary read for people starting to work in the field of PDE-constrained optimal control. More experienced researchers in this field may use it as a source of ideas for explaining things while teaching about PDE-constrained optimization.” (Volker H. Schulz, SIAM Review, Vol. 61 (2), 2019)
Buy options