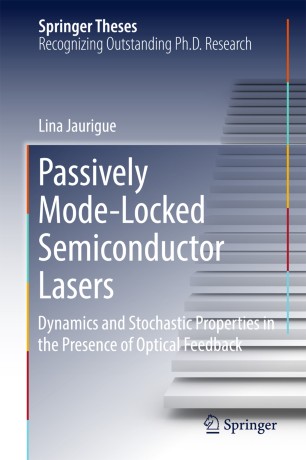 Dynamics and Stochastic Properties in the Presence of Optical Feedback

This thesis investigates the dynamics of passively mode-locked semiconductor lasers, with a focus on the influence of optical feedback on the noise characteristics. The results presented here are important for improving the performance of passively mode-locked semiconductor lasers and, at the same time, are relevant for understanding delay-systems in general. The semi-analytic results developed are applicable to a broad range of oscillatory systems with time-delayed feedback, making the thesis of relevance to various scientific communities. Passively mode-locked lasers can produce pulse trains and have applications in the contexts of optical clocking, microscopy and optical data communication, among others. Using a system of delay differential equations to model these devices, a combination of numerical and semi-analytic methods is developed and used to characterize this system.

Lina Jaurigue received her BSc in physics, mathematics and geophysics in 2009 from Victoria University of Wellington in New Zealand. In 2011 she completed her BSc with First Class Honours in physics and following this her MSc in physics in 2013, both also from the Victoria University of Wellington. In 2013 she started her doctoral studies at the Technische Universität Berlin, which she completed in 2016. Her scientific interests include nonlinear laser dynamics, delay differential equations and quantum transport. She has authored and co-authored 8 peer-reviewed scientific papers.