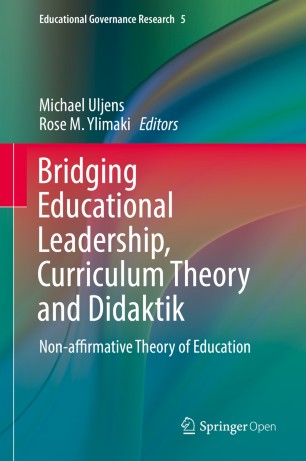 This volume argues for the need of a common ground that bridges leadership studies, curriculum theory, and Didaktik. It proposes a non-affirmative education theory and its core concepts along with discursive institutionalism as an analytical tool to bridge these fields. It concludes with implications of its coherent theoretical framing for future empirical research.

Recent neoliberal policies and transnational governance practices point toward new tensions in nation state education. These challenges affect governance, leadership and curriculum, involving changes in aims and values that demand coherence. Yet, the traditionally disparate fields of educational leadership, curriculum theory and Didaktik have developed separately, both in terms of approaches to theory and theorizing in USA, Europe and Asia, and in the ways in which these theoretical traditions have informed empirical studies over time. An additional aspect is that modern education theory was developed in relation to nation state education, which, in the meantime, has become more complicated due to issues of ‘globopolitanism’. This volume examines the current state of affairs and addresses the issues involved. In doing so, it opens up a space for a renewed and thoughtful dialogue to rethink and re-theorize these traditions with non-affirmative education theory moving beyond social reproduction and social transformation perspectives.