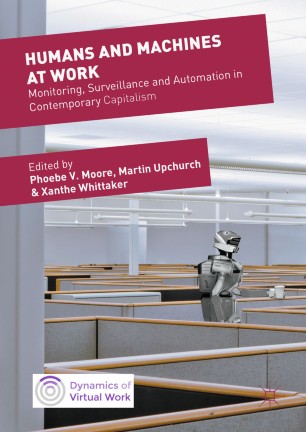 Humans and Machines at Work

In the era of the so-called Fourth Industrial Revolution, we increasingly work with machines in both cognitive and manual workplaces. This collection provides a series of accounts of workers’ local experiences that reflect the ubiquity of work’s digitalisation. Precarious gig economy workers ride bikes and drive taxis in China and Britain; domestic workers’ timekeeping and movements are documented; call centre workers in India experience invasive tracking but creative forms of worker subversion are evident; warehouse workers discover that hidden data has been used for layoffs; academic researchers see their labour obscured by a ‘data foam’ that does not benefit them; and journalists suffer the algorithmic curse. These cases are couched in historical accounts of identity and selfhood experiments seen in the Hawthorne experiments and the lineage of automation.

rning about monitoring and surveillance, automation, the gig economy and the quantified self in the workplace.

Phoebe V. Moore works at Middlesex University London. She is an internationally known researcher and lecturer who writes about labour, technology and global governance.

Martin Upchurch is Professor of International Employment Relations at Middlesex University London. He has published more than 40 articles in the field of labour studies and industrial relations.

Xanthe Whittaker is a post-graduate student in the School of Management at the University of Leicester. Her doctoral research is an ethnographic study of digital journalism in the UK and her research interests include the digitalisation of work, atypical work, and labour process analysis.

“This book is a great read for anyone interested in learning about monitoring and surveillance of the workforce using digital technologies. This book will also appeal to scholars in the field of ethics in the workplace, sociology of work, and digital labor studies.” (Swatee B. Kulkarni, Journal of Business Ethics, Vol. 161, 2020)