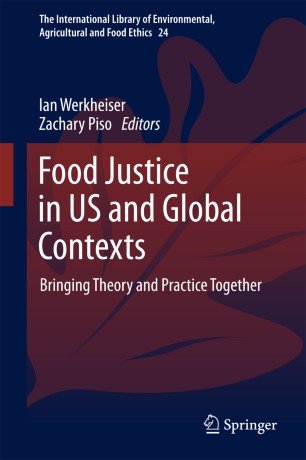 Food Justice in US and Global Contexts

Bringing Theory and Practice Together

Part of the The International Library of Environmental, Agricultural and Food Ethics book series (LEAF, volume 24)

This book offers fresh perspectives on issues of food justice. The chapters emerged from a series of annual workshops on food justice held at Michigan State University between 2013 and 2015, which brought together a wide variety of interested people to learn from and work with each other. Food justice can be studied from such diverse perspectives as philosophy, anthropology, economics, gender and sexuality studies, geography, history, literary criticism, philosophy and sociology as well as the human dimensions of agricultural and environmental sciences. As such, interdisciplinary workshops are a much-needed vehicle to improve our understanding of the subject, which is at the center of a vibrant and growing discourse not only among academics from a wide range of disciplines but also among policy makers and community activists. The book includes their perspectives, offering a wide range of approaches to and conceptions of food justice in a variety of contexts. This invaluable work requires readers to cross boundaries and be open to new ideas based on different assumptions.

Ian Werkheiser is an Assistant Professor of Philosophy at the University of Texas Rio Grande Valley (UTRGV). His work focuses on communities facing problems in their environment and food systems in a context of social and political marginalization or oppression. Prior to joining UTRGV, Ian was a founder and coordinator for the Center for Regional Food Systems’ Food Justice and Sovereignty Workgroup at Michigan State University. He has also helped organize several conferences, including Everybody Eats: Cultivating Food Democracy, a community-based conference on Michigan food issues, and the first ever Michigan Environmental Justice Coalition Statewide Summit.

Zachary Piso is a doctoral candidate in the Department of Philosophy at Michigan State University. Along with Ian Werkheiser, he organized the first four annual Workshops on Food Justice, where this volume and its chapters were conceived and developed. Zach is a transdisciplinary environmental ethicist who works with scien

tists and stakeholders to explore the values that inform environmental science, management, and policy. He is particularly focused on questions of justice that arise through the use of the social sciences to understand and manage ecosystems.