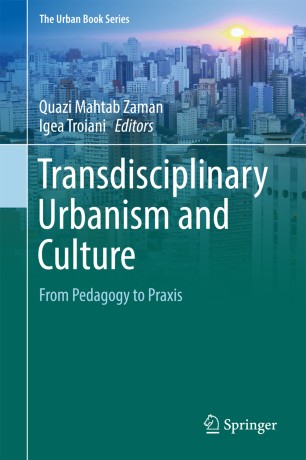 From Pedagogy to Praxis

This book presents a collection of critical, multi-disciplinary essays on urban research by established and early career researchers who participated in the 9th Annual AHRA (Architectural Humanities Research Association) Research Student Symposium. The symposium was held at the Scott Sutherland School of Architecture and Built Environment, Robert Gordon University in Aberdeen from Saturday 19th May to Sunday 20th May 2012. The authors highlight contemporary research issues in urban development in search of new and fresh approaches that reflect the changing principles and praxis of urban conditions. The common ambition is to create new lines of knowledge enquiry in urban research. Due to socio-economic, political and technological changes to urban production and patterns of consumption, as well as a drive for inter-, cross-, multi- and transdisciplinary practice, the essays also reflect the ideological shift currently underway in academic faculties and external research organisations.r>

Quazi Mahtab Zaman (PhD) is an architect, urban designer and academic, currently teaching architecture and urban design theory and practice and the course leader for BSc Construction Management at the Scott Sutherland School of Architecture, Robert Gordon University, Aberdeen, Scotland. He researches ‘children in city’ and has introduced a new participatory pedagogy and practice: ‘community as extended classroom’; researching on ‘urban interface’ and ‘theorizing congestions in cities in developing countries’. He serves on the editorial board of Open House International and Global Built Environment Review. He has been Steering Group member of the Architectural Humanities Research Association (AHRA) since 2012.

Igea Troiani (PhD) is an academic and architect-filmmaker. She is founding director of the research film company Caryatid Films and of the Oxford based architectural practice Original Field of Architecture Ltd. She is co-editor of The Politics of Making and i
s founding editor-in-chief of the international award-winning journal Architecture and Culture: Journal of the Architectural Humanities Research Association (AHRA). She was Chair of AHRA from 2009-2012 and has been a Steering Group member since 2006. Her teaching, textual research and film making as research practice center on the positive exchange between disciplinary and trans-disciplinary knowledge in Architecture Humanities.