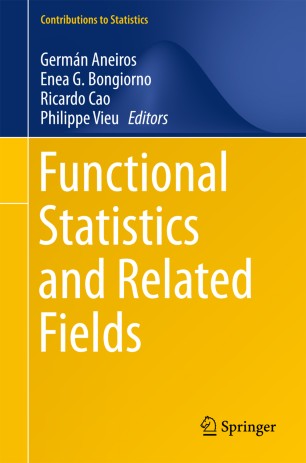 Part of the Contributions to Statistics book series (CONTRIB.STAT.)

This volume collects latest methodological and applied contributions on functional, high-dimensional and other complex data, related statistical models and tools as well as on operator-based statistics. It contains selected and refereed contributions presented at the Fourth International Workshop on Functional and Operatorial Statistics (IWFOS 2017) held in A Coruña, Spain, from 15 to 17 June 2017. The series of IWFOS workshops was initiated by the Working Group on Functional and Operatorial Statistics at the University of Toulouse in 2008. Since then, many of the major advances in functional statistics and related fields have been periodically presented and discussed at the IWFOS workshops.

Germán Aneiros received his Ph.D. in Mathematics from the University of Santiago de Compostela (Spain) in 2001. Since 2003 he has been Associate Professor of Statistics at the University of A Coruña (Spain). His research focuses on Time Series Analysis and statistical inference for Functional Data. He is Associate Editor of Computational Statistics.

Enea G. Bongiorno received his Ph.D. in Mathematics at Università degli Studi di Milano in 2008. Since 2013 he has been Assistant Professor in Statistics at Università del Piemonte Orientale. His interests include non- and semi-parametric methods for functional data and, previously, random fuzzy set-valued processes. He was co-editor of the volume “Contributions in infinite-dimensional statistics and related topics”.

Philippe Vieu is Full Professor of Statistics at University Toulouse 3, France. He is the author of more than 120 papers in international journals and of various books, mainly in the fields of Functional Data Analysis, Nonparametric Statistics and Time Series Analysis. In the last decade he was member of the Editorial Board of various international journals, including Journal of Nonparametric Statistics, Test, Statistics & Probability Letters, Journal of Multivariate Analysis, Computational Statistics and CSDA. At the end of the nineties, he was one of the co-creators of the working group STAPH in Toulouse which is at the origin of IWFOS meetings.