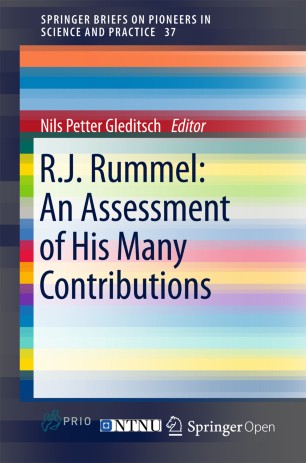 R.J. Rummel: An Assessment of His Many Contributions

Part of the SpringerBriefs on Pioneers in Science and Practice book series (BRIEFSPIONEER, volume 37)

This book is open access under a CC BY license.

The book provides a critical and constructive assessment of the many contributions to social science and politics made by Professor R. J. Rummel. Rummel was a prolific writer and an important teacher and mentor to a number of people who in turn have made their mark on the profession. His work has always been controversial. But after the end of the Cold War, his views on genocide and the democratic peace in particular have gained wide recognition in the profession. He was also a pioneer in the use of statistical methods in international relations. His work in not easily classified in the traditional categories of international relations research (realism, idealism, and constructivism). He was by no means a pacifist and his views on the US-Soviet arms race led him to be classified as a hawk. But his work on the democratic peace has become extremely influential among liberal IR scholars and peace researchers. Above all, he was a libertarian.