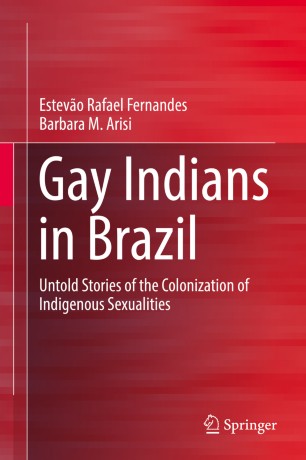 Untold Stories of the Colonization of Indigenous Sexualities

This book unveils an ignored aspect of the Brazilian history: how the colonization of the country shaped the sexuality of its indigenous population. Based on textual research, the authors show how the government and religious institutions gradually imposed the family model considered as "normal" to Brazilian indigenous gays through forced labor, punishment, marriages with non-indigenous and other methods.

However, such disciplinary practices didn’t prevent the resistance of the natives whose sexuality operates out of the hegemonic model, and the book also analyzes the impact of these forms of dissent on the development of indigenous movements, interethnic relations and indigenous policies in Brazil.

Building upon Post-Colonial and Queer theories, the authors present a historical overview of the ideas and practices employed by the religious and governmental authorities to repress homosexuality among indigenous peoples since the beginning of the colonization process, on the 16th century. They also show how this process of colonization of indigenous sexualities goes beyond the formal colonization period, which ended with the Brazilian Independence in 1822, and is part of a wider process of compulsory heterosexualization and heteronormativity of native peoples, based on scientific, theological, social and cultural assumptions that inspired religious, civilizing, academic and political practices throughout Brazilian history.

Estevão R. Fernandes is an anthropologist and associate professor at the Federal University of Rondonia, Brazil. He has  a PhD  in Social Sciences from the  University of Brasilia and was a visiting scholar at Duke University (North Carolina, 2014) under the advisorship of Professor Walter D. Mignolo. He has published articles in Latin American and European journals about indigenous policy in Brazil and indigenous cosmology. In recent years, has dedicated his studies to understand the Brazilian indigenous sexual universe and received his PhD with a thesis based on a comparative study of  American and Brazilian indigenous gays. He is currently developing researches about  the indigenous sexual diversity in the Brazilian Amazon, where he lives.

Barbara M. Arisi is an anthropologist and journalist. She is associate professor at the Federal University of Latin American Integration (UNILA), in Foz do Iguaçu, Paraná, Brazil, where she was the Dean of the Latin American Institute of Arts, Culture and History. She has a PhD in Social Anthropology from the Federal University of Santa Catarina, with a PhD internship at the University of Oxford. She works with the Matis indigenous people from the Vale do Javari, Amazon. She has written about indigenous cosmologies, sexualities economy and their demands in environmental arenas. Currently she is a visiting scholar at the Vrije Universiteit Amsterdam where she studies waste management and circular economy.