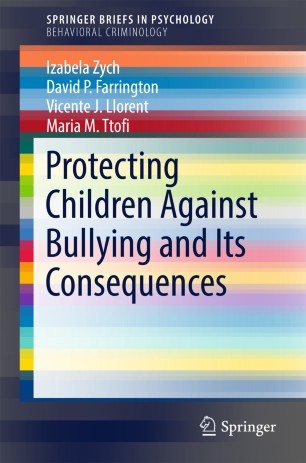 Protecting Children Against Bullying and Its Consequences

This compact resource synthesizes current research on bullying in the schools while presenting strengths-based approaches to curbing this growing epidemic. Its international review of cross-sectional and longitudinal studies unravels the complex dynamics of bullying and provides depth on the range of negative outcomes for bullies, victims, enablers, and victims who bully. Chapters on protective factors against bullying identify personal competencies, such as empathy development, and keys to a positive school environment, featuring findings on successful school-based prevention programs in different countries. Throughout, the authors clearly define bullying as a public health/mental health issue, and prevention as a deterrent for future antisocial and criminal behavior.

With its wealth of answers to a global concern, Protecting Children against Bullying and Its Consequences is a definitive reference and idea book for the international community of scholars in criminology and developmental psychology interested in bullying and youth violence, as well as practitioners and policymakers.

Izabela Zych Ph.D., is a Reader in the Department of Psychology in the University of Cordoba (Spain) and a member of the LAECOVI research team. She studied Psychology at the Jagiellonian University (Poland) and the University of Granada (Spain) and she earned her PhD in Psychology from the latter. She is a visiting scholar in the Institute of Criminology, Cambridge University. Her main research interest focuses on bullying and cyberbullying, with particular attention to personal and contextual protective factors. She has led and participated in different research projects, has been an invited speaker in international conferences and published various journal articles related to the topic. Her undergraduate teaching and PhD supervision is mostly related to the school climate and competencies that protect children against bullying.

David P. Farrington, Ph.D., is Emeritus Professor of Psychological Criminology in the Institute of Criminology, Cambridge University. He received the Stockholm Prize in Criminology in 2013. He is Chair of the American Society of Criminology Division of Developmental and Life-Course Criminology. His major research interest is in developmental criminology, and he is Director of the Cambridge Study in Delinquent Development, a prospective longitudinal survey of over 400 London males from age 8 to age 56. In addition to over 700 published journal articles and book chapters on criminological and psychological topics, he has published 100 books, monographs and government reports. He has conducted research on bullying for 25 years, and he co-authored (with Maria M. Ttofi) the Campbell Collaboration systematic review of the effectiveness of programs to reduce bullying.

Vicente J. Llorent, Ph.D., is a Reader in the Department of Education in the University of Cordoba (Spain) and earned his PhD in Pedagogy from the University of Seville. He is a visiting scholar in the Institute of Criminology, Cambridge University. He coordinates the teaching group about Education, Diversity, ICT and Society at the University of Cordoba. His teaching and PhD supervision is focused on the design and development of school curricula and diversity in schools. His research focuses on similar topics with specific attention to the school role in enhancing positive interpersonal relationships and development in inclusive settings. He has published numerous journal articles, participated in national and international research projects, and has been an invited speaker in national and international conferences.

Maria M. Ttofi, Ph.D., graduated in Educational Sciences (2000), with a Major in Psychology, and Social and Political Sciences (2005) from the University of Cyprus before joining Clare Hall College, University of Cambridge, for her graduate (MPhil and PhD) studies. She is a University Lecturer in Psychological Criminology at the Institute of Criminology, University of Cambridge, and a Fellow of Wolfson College. She is interested in the development of conduct problems, crime and violence through the life course. Her earlier research has focused on highly aggressive and victimized youth; the impact of negative early life experiences on the healthy psychosocial development of children; and early intervention research against youth aggression and victimization. For her contributions to psychological criminology and intervention research, she was awarded the 2009 Nigel Walker Prize (Cambridge University, 2009), the 2012 Young Scholar Award of the European Association of Psychology and Law and the 2012 Early Career Award of the Alberti Center for Bullying Abuse Prevention at the University at Buffalo, State University of New York. Previous/current post-doctoral fellowships and research projects have been supported by the Leverhulme Trust, the Newton Trust, the British Academy, the US National Institute of Justice, and the Jacobs Foundation.