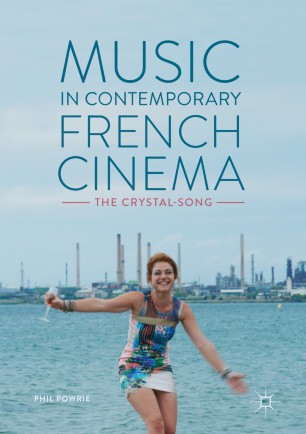 This book explores composed scores and pre-existing music in French cinema from 1985 to 2015 so as to identify critical musical moments. It shows how heritage films construct space through music, generating what Powrie calls “third space music,” while also working to contain the strong women characters found in French heritage films through the use of leitmotifs and musical cues. He analyses fiction films in which the protagonists perform at the piano, showing how musical performance supports the performance of gender. Building on aspects of musical performance, and in particular the use of songs performed in films, Powrie uses a database of 300 films since 2010 to theorize the intervention of music at critical moments as a “crystal-song”. Applying Roland Barthes’s concept of the “punctum” and Gille Deleuze’s concept of the “crystal-image,” Powrie establishes the importance of the crystal-song, which reconfigures time as a crystallization of past, present and future.

Phil Powrie is Professor of Cinema Studies at the University of Surrey, UK, Chair of the British Association of Film Television and Screen Studies. He has published widely on French cinema and is the Chief General Editor of the journal Studies in French Cinema.

“Phil Powrie’s book would already be quite valuable for its first half—a revealing analysis of music’s role in the construction of gender, space, and time in French cinema since the 1980s, as well as of the dominance of English-language songs in recent French films. But then, his forcefully original work on the ‘crystal-song’ is required reading for anyone wishing to understand the frisson of meaning and affect we experience with particular songs, songs that change the direction and apprehension of stories on screen.” (Claudia Gorbman, Professor Emeritus of Film Studies at the University of Washington, Tacoma, USA. She is the author of Unheard Melodies: Narrative Film Music, 1987)
“Powrie’s study of song in French cinema since the 1980s is full of compelling insights into the relationships between song and narrative, sounds and images, and genre and gender. Moving across the boundaries between “high” and “low” film art, between composed scores and pre-existing music, and between French and English songs, Powrie generates new historical knowledge and creates a stimulating new theoretical concept, the “crystal-song”.” (Kelley Conway, Professor of Film at the University of Wisconsin-Madison, USA. She is the author of Chanteuse in the City: The Realist Singer in French Film, 2004) “This book takes on an exciting project, approaching the history of French cinema from the vantage point of its engagement with popular music. Popular song has been essential to French cinema throughout its history, as Phil Powrie argues; but it has drawn relatively little scholarly attention. Cinema—and maybe French cinema especially—is thought of as a visual art, first and foremost. Powrie’s examination of French cinema from the standpoint of its links to popular music rests on an original, counterintuitive move that yields fresh insights.” (Charles O’Brien, Associate Professor of Film Studies at Carleton University, Canada. He is the author of Cinema’s Conversion to Sound: Technology and Film Style in France and the United States, 2005)
Buy options