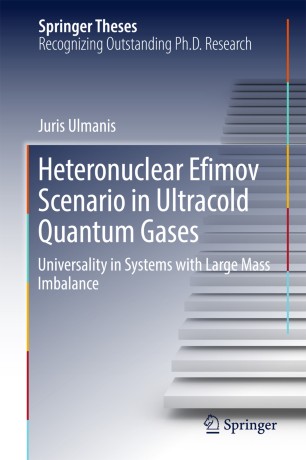 This thesis represents a decisive breakthrough in our understanding of the physics of universal quantum-mechanical three-body systems.
The Efimov scenario is a prime example of how fundamental few-body physics features universally across seemingly disparate fields of modern quantum physics. Initially postulated for nuclear physics more than 40 years ago, the Efimov effect has now become a new research paradigm not only in ultracold atomic gases but also in molecular, biological and condensed matter systems. Despite a lot of effort since its first observations, the scaling behavior, which is a hallmark property and often referred to as the “holy grail” of Efimov physics, remained hidden until recently. In this work, the author demonstrates this behavior for the first time for a heteronuclear mixture of ultracold Li and Cs atoms, and pioneers the experimental understanding of microscopic, non-universal properties in such systems. Based on the application of Born-Oppenheimer approximation, well known from molecular physics textbooks, an exceptionally clear and intuitive picture of heteronuclear Efimov physics is revealed.

Juris Ulmanis is a postdoctoral researcher at the Physics Institute of Heidelberg University, Germany. He studied physics at the University of Hannover and the University of Latvia, where he obtained a M.Sc. degree in physics with distinction in 2010. Thereafter he was awarded a DAAD scholarship for doctoral studies in Heidelberg University under the supervision of Prof. Dr. Matthias Weidemüller. He completed his doctoral degree in 2015 with the highest distinction and now continues exploring quantum physics of atomic and molecular systems under extreme conditions.