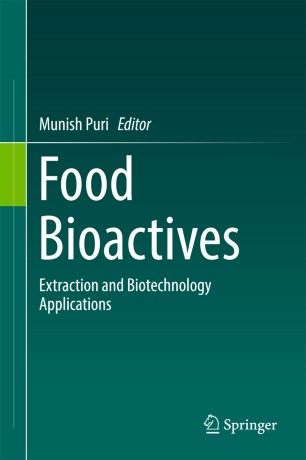 This book focuses on various types of bioactive compounds, including secondary metabolites, oligosaccharides, polysaccharides, flavonoids, peptides/proteins, carotenoid pigments, quinones, terpenes, and polyunsaturated fatty acids, and presents an overview of their nutraceutical activities. It covers the current status and future potential of food compounds, as well as extraction technologies for biaoctives derived from plant, fungi and marine-derived bioactive agents. Finally, health-promoting effects of plant, fungi and marine-derived bioactive agents are discussed.
Chapters come from top researchers in this area from around the globe. The volume caters to the needs of undergraduate and post-graduate students in the area of food biotechnology, food bioprocessing, biotechnology, food engineering, etc., and also contains information pertinent to researchers.

Munish Puri is a Deputy Director and Associate Professor, Flinders Centre for Marine Bioproducts Development, Medical Biotechnology, School of Medicine, Flinders University, Adelaide, Australia. His main research activities include a) microbial fermentation for producing valuable enzymes and omega-3 fatty acids, b) nutraceutical extraction for food supplementation, and c) use of nanotechnology for enhancing thermostability of enzymes with applications in bioprocessing. He holds a PhD in Industrial Biotechnology from Punjabi University India (1994) and did his post-doctoral training in the area of protein structures at University of Oxford, UK (2001-02). He had the privilege of working as a University of New South Wales Endeavour Fellow, at University of Queensland, Australia (2004-05). Dr Puri has worked as a full Professor/Associate Professor, Department of Biotechnology, Punjabi University, India (2003-09) where he developed the area of enzyme biotechnology before moving to Deakin University, Australia as a Visiting Professor and Senior Research Fellow. He has served as the laboratory head of industrial biotechnology at the Centre for Chemistry and Biotechnology (CCB), Deakin University (2009-16) and has significantly contributed towards the development of bioprocessing research where emphasis was laid upon various bioactives (enzymes/ proteins, sweeteners, omega-3 fatty acids and carotenoids). He has contributed towards bioprospecting of novel microorganisms for omega-3, lipids and enzyme production; transformation of intermediates; expression and production peptides & therapeutic proteins; and immobilizing lipases for the production of omega-3 acid production.
Dr Puri has published more than 108 scientific articles, including 91 peer-reviewed journal papers, 3 patents, and 14 book chapters, mainly in high impact factor biotechnology/ applied microbiology journals. A large number of his publications fall within the discipline of industrial biotechnology and listed in ISI web of Science subject category “Biotechnology and Applied Microbiology”. He has supervised 16 PhD dissertations, 30 MSc theses, and about 10 undergraduate projects.
In November 2015, he was admitted as a Fellow of Royal Society of Chemistry (FRSC), UK based on his contribution to the discipline.