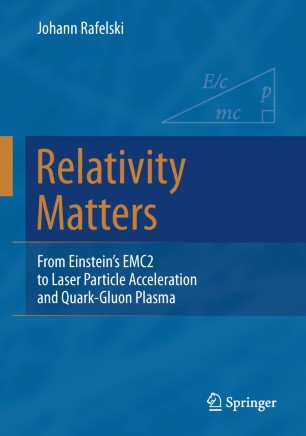 From Einstein's EMC2 to Laser Particle Acceleration and Quark-Gluon Plasma

Rafelski presents Special Relativity in a language deemed accessible to students without any topical preparation - avoiding the burden of geometry, tensor calculus, and space-time symmetries – and yet advancing in highly contemporary context all the way to research frontiers. Special Relativity is presented such that nothing remains a paradox or just apparent, but rather is explained.

A text of similar character, content, and scope, has not been available before. This book describes Special Relativity when rigid material bodies are introduced describing the reality of body contraction; it shows the relevance of acceleration and the necessary evolution of the theoretical framework when acceleration is critical. This book also presents the evolving views of Einstein about the aether.

In addition to a careful and elementary introduction to relativity complete with exercises, worked examples and many discussions, this volume connects to current research topics so that readers can explore Special Relativity from the foundation to the frontier.

Johann Rafelski is a theoretical physicist working at The University of Arizona in Tucson, USA. Born in 1950 in Krakow, Poland, he received his Ph.D. with Walter Greiner at University Frankfurt, Germany in 1973. In 1977 Rafelski arrived at CERN-Geneva, where with Rolf Hagedorn he developed the search for quark-gluon plasma in relativistic heavy ion collision as a novel research domain. He invented and developed the strangeness quark flavor as the signature of quark-gluon plasma, advancing the discovery of this new phase of primordial matter. Professor Rafelski also has held professional appointments at the University of Pennsylvania in Philadelphia, Argonne National Laboratory in Chicago, the University of Frankfurt, the University of Cape Town, the University of Paris-Jussieu, and the Ecole Polytechnique. He has been a DFG Excellence Initiative Professor at Ludwig-Maximillian University Munich. In collaboration with researchers from the Ecole Polytechnique in Paris and ELI-Beamlines in Prague he is using ultra-intense lasers in nuclear and fundamental physics.

Prof. Rafelski is the editor of the open-access book: Melting Hadrons, Boiling Quarks - From Hagedorn Temperature to Ultra-Relativistic Heavy-Ion Collisions at CERN - With a Tribute to Rolf Hagedorn (Springer, 2016)