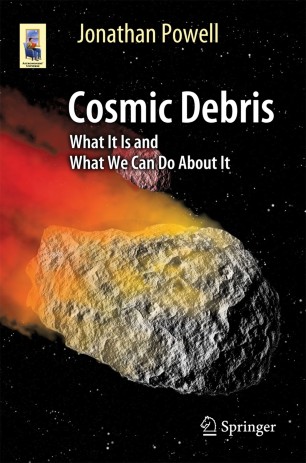 What It Is and What We Can Do About It

This book examines the mysterious and the well-studied debris in Earth’s crowded neighborhood. From orbiting comets to the workings of the Asteroid Belt, and from meteor showers to our home-grown network of orbiting satellites, the full diversity of space objects and the debris they create is explored. Powell also discusses some of the current research techniques used to find potentially harmful rogue elements, with an emphasis on keeping watch for any objects that may intersect Earth’s orbit. Such bodies also impact other worlds, and much has been learned from observing these encounters.
The information in this book is intended to foster thought about the universe in which we live, but without overloading its readers with numbers and lecture-room analysis. Like a good thriller, it allows its readers to pace themselves with the story and, by the end, encourages them to draw their own conclusions.

Jonathan Powell is a native of South Wales. With an interest in astronomy and related subjects since the late 1970’s, Jonathan has written for UK national astronomical magazines, and broadcast on the topic at both regional and national level for BBC Radio, dating back to 1985. Jonathan also took part in a BBC Radio 4 documentary series on meteorites. He has been secretary of his local astronomical society for the past 20 years and is the British Astronomical Association’s ‘Campaign for Dark Skies’ county officer. A former member of the Association for Astronomy Education – which encouraged and promoted astronomy among the young – he also headed up ‘SpaceQuest’, an educational lecture tool, which toured schools with a two hour presentation on astronomy. His publications include three articles in Astronomy Now magazine. He has written a book about castles in South and West Wales – Fortress Wales – and articles on observational astronomy published in astronomical society newsletters.

“The author provides a narrative that describes the order of the universe and acknowledges its vastness, as the cosmos is experiencing an ‘expansion phase.’ … Well researched and thought provoking, Cosmic Debris is a good read for the academic space enthusiast. Summing Up: Recommended. All readers.” (R. I. Saltz, Choice, Vol. 55 (5), January, 2018)
Buy options