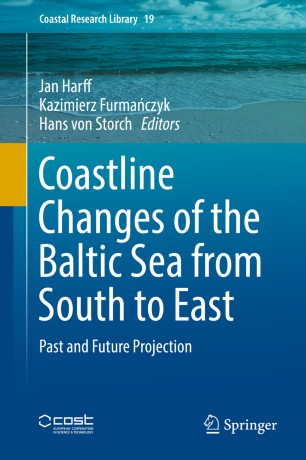 Coastline Changes of the Baltic Sea from South to East

Past and Future Projection

This book discusses sea-level and coastline changes. These topics are becoming increasingly important for populations living along the edge of the world’s oceans and seas, especially in areas where eustatic sea-level rise is superimposed on isostatic subsidence and storm-induced coastal erosion. This is the case at the southern and eastern Baltic Sea coast: in the south, glacio-isostatic subsidence enhances the effect of climate-induced sea-level rise and strong storm effects are causing a continuous retreat of the coast. On the eastern coast glacio-isostatic uplift compensates for eustatic sea-level rise, but storm-induced waves are responsible for permanent morphodynamic changes to the coastline. There is an increasing need for protection concepts for defense but also for the economic use of the different types of coastal zones. The elaboration of these management concepts can be facilitated through models that generate future projections of coastal developments in the light of modern climate change. This anthology comprises the results of the research project “Coastline Changes of the southern Baltic Sea – Past and future projection (CoPaF)” funded by the Polish Ministry of Science and Higher Education, which was run by a team of Estonian, German, Lithuanian, and Polish geoscientists and coastal engineers from 2010 to 2013 and overlapped with and complemented the work of COST Action SPLASHCOS supported by COST (European Cooperation in Science and Technology). As the southern and eastern Baltic serves as a natural laboratory for the investigation of coastal processes, the project’s findings contribute not only to the solution of regional problems in Baltic coastal research and engineering, but also to worldwide interests in description, modelling and parameterization of coastal processes and morphodynamics.