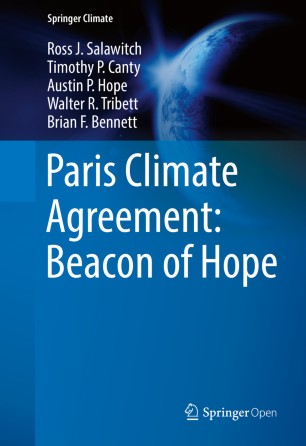 This volume presents an Empirical Model of Global Climate developed by the authors and uses that model to show that global warming will likely remain below 2ºC, relative to preindustrial, throughout this century provided: a) both the unconditional and conditional Paris INDC commitments are followed; b) the emission reductions needed to achieve the Paris INDCs are carried forward to 2060 and beyond.

The first section of the book provides a short overview of Earth’s climate system, describing and contrasting climatic changes throughout the planet’s history and anthropogenic changes post-Industrial Revolution. The second section describes the climate model developed by the authors (Canty et al., Atmospheric Chemistry and Physics, 2013) and contrasts the model with climate models used in the Intergovernmental Panel on Climate Change (IPCC) 2013 Report. Chapter 3 examines both the unconditional (i.e., firm commitments) and conditional Paris INDCs (commitments contingent on financial flow and/or technology transfer) through the lens of their climate model and concludes that if all of the Paris INDCs are followed, then they are indeed a beacon of hope for Earth’s climate. The fourth part of the book offers a perspective of energy needs and subsequent emissions reductions required to meet the Paris temperature goals, illuminating challenges faced both in the developing world and the developed world.

Throughout the book, easy-to-understand charts and graphics illustrate concepts. The scientific basis of Chapters 2 and 3 was first presented in a keynote session of the 96th Annual Meeting of the American Meteorological Society in January, 2016.

Ross Salawitch serves as Professor in the Departments of Atmospheric and Oceanic Science, Chemistry and Biochemistry, as well as the Earth System Science Interdisciplinary Center at the University of Maryland. Before coming to Maryland in 2007, he served as a Research Scientist at NASA's Jet Propulsion Laboratory. Dr. Salawitch has been named as a Highly Cited Researcher in Geosciences by Thompson Scientific, which recognizes the 250 most cited researchers in the field of geosciences during the past twenty years.

Austin Hope is a PhD candidate in the Department of Atmospheric and Oceanic Science at the University of Maryland. Before coming to the University of Maryland, Austin earned his bachelor's degree at Washington University in St. Louis with College Honors in Arts & Sciences. He participated in the Honorary Scholars Program while majoring in Mathematics and minoring in Earth & Planetary Sciences as well as Physics.

Brian Bennett serves as Faculty Assistant in the Department of Atmospheric and Oceanic Science at the University of Maryland. Brian is a beginning career atmospheric scientist and a recent graduate of the department’s Master of Professional Studies, class of 2015. Prior to his studies at Maryland, he had earned a Bachelor of Science in Biological Anthropology at the George Washington University, in 2006, where he was a recipient of their Presidential Academic Scholarship.