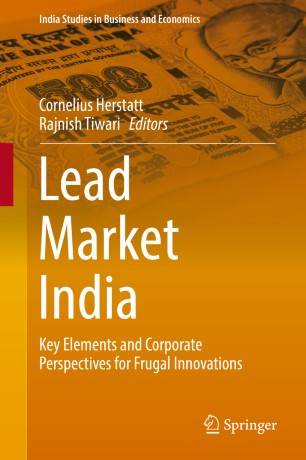 India is still perceived by some as a developing country that has yet to create world-class products of its own. However, this book shows that in recent years India has emerged as a lead market for frugality-driven innovations that are affordable, robust and successful even outside its geographic boundaries. Many global companies have recognized these changes and are ramping up their local R&D capabilities. At the same time, several Indian firms are venturing out to international shores and gaining access to new markets. Using a top-down approach, the book takes a closer look at systems of innovation at work and presents examples of successful, corporate innovations in multiple industries and their contextual conditions.

Cornelius Herstatt is professor of Innovation Management and Director of the Institute for Technology and Innovation Management of Hamburg University of Technology (TUHH). His research focuses on lead user and open innovation in global contexts. His recent work involves combining elements of this research with the investigation of lead markets. He has also been doing extensive research on Innovation Management practices in India and Japan. He holds a guest professorship with Tohoku-University in Sendai and is co-founder of the European Institute for Technology and Innovation Management (EITIM). Prof. Herstatt is a research alumni/fellow of the East-West Centre (Honolulu), JSPS (Japanese Society for promoting Science) and Templeton College in Oxford (UK). He is a founding member of the Center for Frugal Innovation at TUHH and member of its Board of Management.
Rajnish Tiwari is Senior Research Fellow and Program Leader at Institute for Technology and Innovation Management of Hamburg University of Technology (TUHH), where he leads the research program on "Global Innovation". He is one of the founding members of Center for Frugal Innovation and part of its Board of Management. Additionally, he advises Germany's Federal Ministry of Education and Research (BMBF) on “new global innovation paths” in his capacity as a member of the ITA Advisory Circle. He has worked upon extending the theory of lead markets to emerging economies. His current research is primarily focused on “affordable green excellence” that fulfills high quality standards and is responsible in its social and environmental impact. He leads the German-Indian Round Table (GIRT) in Hamburg  and is a member of its Advisory Board of the German-Indian Society.