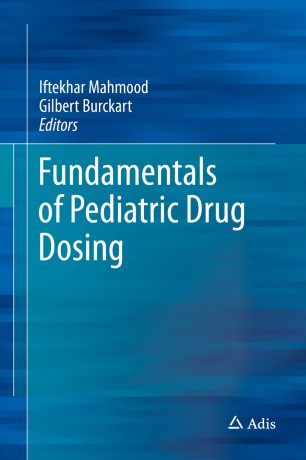 Focused on pediatric physiology, pharmacology, pharmacokinetics and pharmacodynamics, this book illustrates the differences between the pediatric population and adults; knowledge of extreme importance not only during pediatric drug development but also in the clinical practice. Physicians, nurses, clinical pharmacologists, researchers and healthcare professionals will find this an invaluable resource.

With the advent of pediatric exclusivity, and requirements to conduct clinical studies in children, an emphasis has been placed on finding a safe and efficacious dose of a drug in children. Children are not ‘small adults’, and drug dosing in this population requires special consideration. There are subtle physiological and biochemical differences among neonates, infants, children, adolescents and adults and dosing in pediatrics requires proper understanding of these factors. Furthermore, dosing in children, as in adults, should be based on pharmacokinetic and pharmacodynamic data. This is an evolving area, as pediatric pharmacokinetic studies are becoming mandatory for getting approval of new drugs in this population.

Iftekhar Mahmood, Ph. D., is a clinical Pharmacologist at the Center for Biologic Evaluation and Research (CBER), FDA.  He holds a Bachelor of Pharmacy degree and a Ph.D. degree in Pharmaceutical Sciences with specialization in pharmacokinetics.  Dr. Mahmood joined the FDA in December 1993 and for more than 8 years served as a clinical pharmacologist dealing with neuro-pharmacology products in Center for Drug Evaluation and Research (CDER). Since last 10 years, Dr. Mahmood has been a clinical pharmacologist for therapeutic proteins and blood products.  Dr. Mahmood is involved in several CBER and CDER working groups. Dr. Mahmood has published more than 100 scientific papers in peer-reviewed scientific journals.  He is author of the books “Interspecies Pharmacokinetic Scaling”, “Pediatric Pharmacology and Pharmacokinetics”, and “Pharmacokinetic Allometric Scaling in Pediatric Drug Development”. Dr. Mahmood is the recipient of several CDER Intramural Research Grants as well as the recipient of several CDER and CBER awards.

Dr. Burckart moved to the US FDA in 2008.  His duties include participation in the FDA’s Pediatric Review Committee.

“The purpose is to review the evolution of pediatric research as it relates to pediatric drug dosing, an extremely worthy goal. … This book will meet the needs of these readers, particularly those interested in conducting research in children and students and clinicians who want to obtain a more in-depth understanding of dosing medications in pediatric patients. … I am unaware of another book on this subject, particularly for individuals involved in developing and conducting research in this patient population.” (Ina Lee Calligaro, Doody's Book Reviews, February, 2017)
Buy options