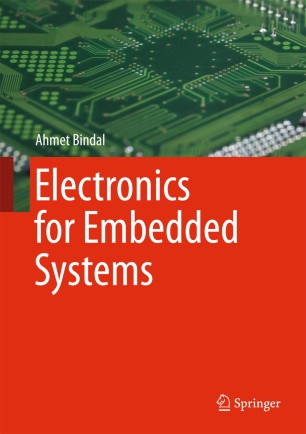 This book provides semester-length coverage of electronics for embedded systems, covering most common analog and digital circuit-related issues encountered while designing embedded system hardware.  It is written for students and young professionals who have basic circuit theory background and want to learn more about passive circuits, diode and bipolar transistor circuits, the state-of-the-art CMOS logic family and its interface with older logic families such as TTL, sensors and sensor physics, operational amplifier circuits to condition sensor signals, data converters and various circuits used in electro-mechanical device control in embedded systems.  The book also provides numerous hardware design examples by integrating the topics learned in earlier chapters.  The last chapter extensively reviews the combinational and sequential logic design principles to be able to design the digital part of embedded system hardware.

Ahmet Bindal received his M.S. and Ph.D. degrees in Electrical Engineering from the University of California, Los Angeles CA. His doctoral research was on the material characterization for high electron mobility GaAs transistors. During his graduate program, he was a graduate research associate and technical consultant for Hughes Aircraft Co. In 1988, he joined the technical staff of IBM Research and Development Center in Fishkill, NY, where he worked as a device design and characterization engineer. He developed asymmetrical MOS transistors and ultra thin Silicon-On-Insulator (SOI) technologies for IBM. In 1993, he transferred to IBM in Rochester, MN, as a senior circuit design engineer to work on the floating-point unit for AS-400 main frame processor. He continued his circuit design career at Intel Corporation in Santa Clara, CA, where he designed 16-bit packed multipliers and adders for the MMX unit for Pentium II processors. In 1996, he joined Philips Semiconductors in Sunnyvale, CA, where he was involved in the designs of instruction/data caches and various SRAM modules for the Trimedia processor. His involvement with VLSI architecture started in Philips Semiconductors and led to the design of the Video-Out unit for the same processor. In 1998, he joined Cadence Design Systems as a VLSI architect and directed a team of engineers to design self-timed asynchronous processors. Starting in 2000, he implemented 802.11a and 802.11b wireless LAN protocols in VLSI. After approximately 20 years of industry work, he joined the Computer Engineering faculty at San Jose State University in 2002. His current research interests range from Nano-Scale Electron Devices to VLSI Design and Robotics. Dr. Bindal has contributed to over 30 scientific journal and conference publications and 10 invention disclosures with IBM.  He currently holds 3 U.S. patents with IBM and 1 with Intel Corporation.