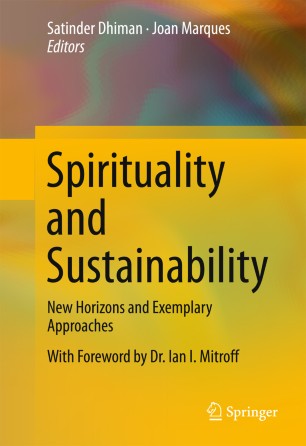 This book aims to examine sustainability and spirituality philosophically with ethics as the balancing force. The goal is to reveal the important intersection between sustainability and spirituality by using spirituality as the invisible guiding hand in the quest for sustainability. The editors and contributors examine old social and economics dilemmas from a new perspective in order to provide alternative approaches to economic and social development. The enclosed contributions cover a broad range of topics such as sustainable development and human happiness, contemporary spirituality, environmental ethics and responsibility, and corporate social responsibility. In addition, the title features real-world case studies and discussion questions that inspire self-reflection and theoretical and empirical deliberation in academic courses and business seminars.

Contemporary approaches to economic and social development have failed to address humankind's abiding need for spiritual growth. For material development to be sustainable, spiritual advancement must be seen as an integral part of the human development algorithm. While the policy makers and governments can play their respective role, each one of us has to consciously adopt spirituality and sustainability as a way of life. This book will rely on the spiritual power of individuals to heal themselves and the environment.

Satinder Dhiman, PhD, EdD, currently serves as a Professor of Management and as the Associate Dean, Chair, and Director of the MBA Program at Woodbury University’s School of Business in Burbank, California. He has served as the Chair for a special MBA Program for Mercedes-Benz executives, China. He also consults as Accreditation Mentor and Site Visit Team Leader for the Accreditation Council for Business Schools and Programs (ACBSP) for various universities in America, Canada, Europe, and India. He has been elected as the President of International Chamber for Service Industry (ICSI), 2014-2016.

He has also completed advanced Executive Leadership Programs at Harvard, Stanford, and Wharton.

Recipient of several national and international academic and professional honors, Satinder won the Woodbury University Ambassador of the Year Award in 2015; Steve Allen Excellence in Education Award in 2006, and the prestigious ACBSP International Teacher of the Year Award in 2004. In 2013, Satinder was invited to be the opening speaker at the prestigious TEDx Conference @ College of the Canyons in Santa Clarita, Calif. He is the founder and Director of Forever Fulfilled, a Los Angeles-based Wellbeing Consultancy, which focuses on workplace wellness and self-leadership.

Satinder’s work has been published in multiple national and international journals, and he has authored, co-authored, and co-edited ten books on management and leadership during the last 7 years. His current research on fulfillment, which is also the theme of his book, Seven Habits of Highly Fulfilled People (2012/2014), is focused on transformative habits of mind for attaining lasting joy and fulfillment in both personal and professional life. In his most recent book, Gandhi and Leadership (2015), Satinder offers perceptive insights into the spiritual and moral mainstay of Gandhi’s exemplary leadership and its abiding influence on the world today.

Joan has authored/co-authored/co-edited more than 14 books on management and leadership topics, including Business and Buddhism (2015), in which Buddhism is approached as a leadership psychology, and Leadership and Mindful Behavior Action, Wakefulness (2014), in which she provides directives to leaders to adopt a wakeful mindset and abstain from the sleepwalking mode. She is also the author of Courage in the Twenty-First Century (2013) and The Awakened Leader (2007), and co-author of, among others, Leading Spiritually (2014), Business Administration Education (2012), Laughter is the Best Teacher (2011), Stories to Tell Your OB Students (2011), From Me to We (2011), Managing in the 21st Century (2011), The Workplace and Spirituality (2009), and Spirituality in the Workplace (2007).

Joan is a co-founder and editor-in-chief of three scholarly journals: The Business Renaissance Quarterly, Journal of Global Business Issues, and Interbeing, Journal of Personal and Professional Mastery. She presents a weekly radio program titled “De Andere Kant” (The Other Side) on Mart Radio, and has been a long-time columnist for De Ware Tijd (The True Times), one of the largest newspapers in Paramaribo, Suriname.