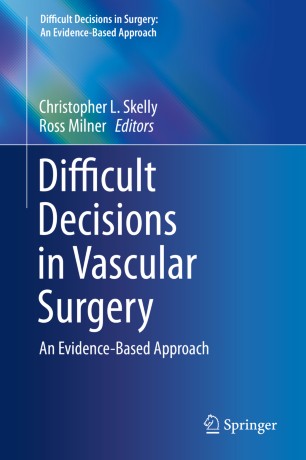 Part of the Difficult Decisions in Surgery: An Evidence-Based Approach book series (DDSURGERY)

This book looks at specific vascular surgery questions that have arisen and where careful analysis is given according to the level of supporting evidence available. As new technology is introduced to treat the cardiovascular system, alternative therapies begin to challenge and also complement traditional vascular surgery. All chapters contain the PICO table to summarise specific characteristics relative to the questions posed in each chapter.

Difficult Decisions in Vascular Surgery- An Evidence-Based Approach is a current and timely reference source for practicing surgeons, surgeons in training, and educators, that describes the recommended ideal approach, rather than customary care, in selected clinical situations.

Christopher Skelly, MD specializes in vascular surgery. He performs a full range of open and endovascular procedures, including the treatment of carotid disease, complex aortic pathologies and peripheral vascular disease. In addition, he performs minimally invasive surgery for the treatment of median arcuate ligament syndrome.

In addition to his clinical practice, Dr. Skelly directs a research laboratory aimed at improving outcomes and durability of vascular graft repairs. As a 2008 recipient of the NHLBI Jointly Sponsored Mentored Clinical Scientist Development Award, his research is funded by the American Vascular Association (AVA)/American College of Surgeons (ACS) and the National Heart, Lung and Blood Institute (NHLBI). Dr. Skelly has authored more than 35 scientific articles in peer-reviewed journals, and several book chapters and reviews. He is working on numerous clinical trials, including a below-knee arterial bypass trial, for which he serves as site-principal investigator.

Director at the Center for Aortic Diseases

Ross Milner, MD, is an internationally recognized expert in vascular surgery. He specializes in the treatment of complex aortic diseases.

Dr. Milner has been the primary investigator on numerous endovascular device trials. In one study, he examined the use of remote pressure sensor monitoring for surveillance after endovascular aortic aneurysm repair. He also is working on the development of a prosthetic vein valve. His research has been funded by the Wallace H. Coulter Foundation.

A dedicated educator and mentor, Dr. Milner teaches medical students, residents and fellows about vascular disease management, including the use of aortic stents. In addition, he is frequently invited to speak at national and international conferences on vascular surgery and aortic aneurysms.

“This is a useful resource for vascular trainees or vascular attendings throughout their careers as they face difficult situations that they do not encounter on a routine basis. … This is an accessible and well‐organized resource for dissecting the components of decision-making for clinical scenarios in vascular surgery. It provides a useful overview of the literature for each scenario and management recommendations graded by level of evidence. I found it to be a good resource.” (Katherine Hekman, Doody's Book Reviews, April, 2017)
Buy options