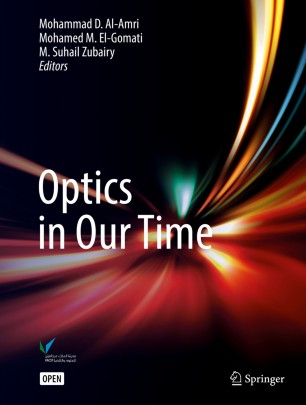 Optics in Our Time

Light and light based technologies have played an important role in transforming our lives via scientific contributions spanned over thousands of years. In this book we present a vast collection of articles on various aspects of light and its applications in the contemporary world at a popular or semi-popular level. These articles are written by the world authorities in their respective fields. This is therefore a rare volume where the world experts have come together to present the developments in this most important field of science in an almost pedagogical manner.

This volume covers five aspects related to light. The first presents two articles, one on the history of the nature of light, and the other on the scientific achievements of Ibn-Haitham (Alhazen), who is broadly considered the father of modern optics. These are then followed by an article on ultrafast phenomena and the invisible world. The third part includes papers on specific sources of light, the discoveries of which have revolutionized optical technologies in our lifetime. They discuss the nature and the characteristics of lasers, Solid-state lighting based on the Light Emitting Diode (LED) technology, and finally modern electron optics and its relationship to the Muslim golden age in science.  The book’s fourth part discusses various applications of optics and light in today's world, including biophotonics, art, optical communication, nanotechnology, the eye as an optical instrument, remote sensing, and optics in medicine. In turn, the last part focuses on quantum optics, a modern field that grew out of the interaction of light and matter. Topics addressed include atom optics, slow, stored and stationary light, optical tests of the foundation of physics, quantum mechanical properties of light fields carrying orbital angular momentum, quantum communication, and Wave-Particle dualism in action.

Mohammad Al-Amri received his MSc in Physics with Distinction from Sussex University, UK in 2001. He went on to complete his PhD at York University and was the recipient of the Stott Prize in Physics for the best PhD thesis in 2004. He then joined the National Center for Applied Physics (NCAP) at King Abdul-Aziz City for Science and Technology (KACST), where he now works as a professor. He was the recipient of the CO/ICTP Gallieno Denardo Award Winner (2013), and Senior Membership in the Optical Society of America (2012). He primarily works in different areas of research related to quantum optics and quantum informatics, where the focus is on quantum optical lithography and microscopy, weak measurement, and direct quantum communication. He has published more than 60 journal papers, including 40 that appeared in the Journal of PRL and PRA, and holds 5 patents. Dr Al-Amri has given many lectures, seminars and invited talks at universities and international conferences.

Mohamed El-Gomati received his BSc degree in Physics and Mathematics from the University of Tripoli in 1970 and went on to complete an MSc in California and a DPhil from York. He became Professor of Electronics at the University of York in 1997. His research interests are in Surface Science and Electron Optics with particular emphasis on the development of novel instrumentation for nano-scale structure and analysis. In particular, he has been a leading figure in developing instrumentation and image interpretation for Auger electron microscopy, as well as for low and ultra-low voltage electron microscopy. Professor El-Gomati is a Fellow of the Institute of Physics and the Royal Microscopical Society. He is the author and co-author of more than 200 articles and patents in these fields. He was awarded an OBE for his services to science in 2012, the Fazlurahman Khan award for science and engineering, 2009 and the Cosslett award of the Microbeam Analysis Society of America in 2009. He is also the Chair of the Foundation for Science, Technology and Civilisation (FSTC).

M. Suhail Zubairy is a University Distinguished Professor of Physics and the holder of the Munnerlyn-Heep Chair in Quantum Optics at the Texas A&M University. He received his Ph.D. from the University of Rochester in 1978. He has made pioneering contributions in the fields of quantum computing, laser physics and quantum optics. Prof Zubairy has co-authored two books, one on Quantum Optics and the other on Quantum Computing Devices, and over 350 research papers on a wide variety of research problems relating to theoretical physics. His research has been widely recognised by the physics community and he has won many international awards including the Willis E. Lamb Award for Laser Science and Quantum Optics, Alexander von Humboldt Research Prize, the George H. W. Bush Award for Excellence in International Research, the Outstanding Physicist Award from the Organization of Islamic Countries, the Abdus Salam Prize in Physics, the International Khwarizmi Award from the President of Iran, and the Orders of Hilal-e-Imtiaz and Sitara-e-Imtiaz from the President of Pakistan. Prof. Zubairy is an elected Fellow of the Pakistan Academy of Sciences. He is also a Fellow of the American Physical Society and the Optical Society.

“This is a very well illustrated book, with most of the illustrations in color, and is a compilation of articles written by authorities in the relevant area(s) that is meant for the generally educated public. … the reader will find a virtual cornucopia of optical subject matter!” (Vengu Lakshminarayanan, Optics & Photonics News, osa-opn.org, May, 2018)
PDF
EPUB