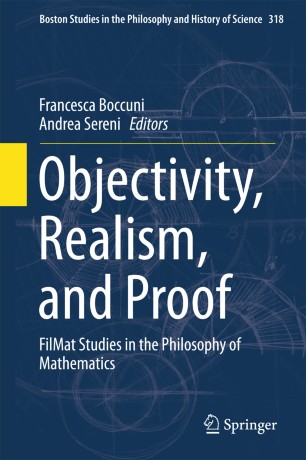 FilMat Studies in the Philosophy of Mathematics

Part of the Boston Studies in the Philosophy and History of Science book series (BSPS, volume 318)

This volume covers a wide range of topics in the most recent debates in the philosophy of mathematics, and is dedicated to how semantic, epistemological, ontological and logical issues interact in the attempt to give a satisfactory picture of mathematical knowledge.

The essays collected here explore the semantic and epistemic problems raised by different kinds of mathematical objects, by their characterization in terms of axiomatic theories, and by the objectivity of both pure and applied mathematics. They investigate controversial aspects of contemporary theories such as neo-logicist abstractionism, structuralism, or multiversism about sets, by discussing different conceptions of mathematical realism and rival relativistic views on the mathematical universe. They consider fundamental philosophical notions such as set, cardinal number, truth, ground, finiteness and infinity, examining how their informal conceptions can best be captured in formal theories.

The philosophy of mathematics is an extremely lively field of inquiry, with extensive reaches in disciplines such as logic and philosophy of logic, semantics, ontology, epistemology, cognitive sciences, as well as history and philosophy of mathematics and science. By bringing together well-known scholars and younger researchers, the essays in this collection – prompted by the meetings of the Italian Network for the Philosophy of Mathematics (FilMat) – show how much valuable research is currently being pursued in this area, and how many roads ahead are still open for promising solutions to long-standing philosophical concerns.

Promoted by the Italian Network for the Philosophy of Mathematics – FilMat