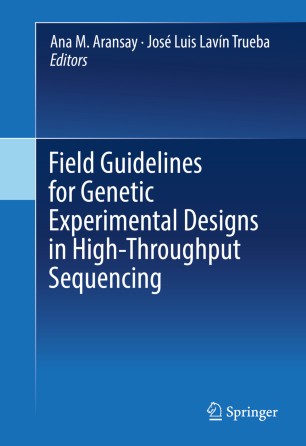 High throughput sequencing (HTS) technologies have conquered the genomics and epigenomics worlds. The applications of HTS methods are wide, and can be used to sequence everything from whole or partial genomes, transcriptomes, non-coding RNAs, ribosome profiling, to single-cell sequencing. Having such diversity of alternatives, there is a demand for information by research scientists without experience in HTS that need to choose the most suitable methodology or combination of platforms and to define their experimental designs to achieve their specific objectives. Field Guidelines for Genetic Experimental Designs in High-Throughput Sequencing aims to collect in a single volume all aspects that should be taken into account when HTS technologies are being incorporated into a research project and the reasons behind them. Moreover, examples of several successful strategies will be analyzed to make the point of the crucial features. This book will be of use to all scientist that are unfamiliar with HTS and want to incorporate such technologies to their research.

Ana M. Aransay received her B.Sc. in Biology from the University of the Basque Country in 1992. She completed her Ph.D. in Medicine at University of Crete, Greece. After receiving her PhD in 1999, she obtained two consecutive post-doctoral research grants from the Basque Country Government to carry out a project on population genetics of vectors of parasitic diseases. Since November 2004, she is responsible for the Genome Analysis Platform at CIC bioGUNE, Derio, Spain where the main objectives are to set up state-of-the-art high throughput technologies in order to characterization of genomes from different points of view. Dr. Aransay has authored many articles and was a co-editor on the book “Bioinformatics for High Throughput Sequencing” published by Springer International Publishing in 2012.
José Luis Lavín Trueba, received two B.Sc., in Biology (1999) and Biochemistry (2000) from the University of Salamanca. For his Ph.D. studies, he became interested in bioinformatics and received his Ph.D. on this discipline at the Dept. of Genetics and Microbiology at the Public University of Navarre in 2008. He has worked in different fields of Bioinformatics (Comparative genomics, Genome Annotation, Promoter sequences analysis and Secreted proteins analysis). During his studies, he also became proficient in some programming languages such as Perl/CGI, MySQL, HTML/CSS, Python or R, which allowed him to develop online biological databases and bioinformatic tools. As a result of this work, he has collaborated in several genome sequencing projects as part of international sequencing consortiums. During 2012, he entered the Next Generation Sequencing data analysis field, working as Platform Specialist in bioinformatics for the Genome Analysis Platform at CIC bioGUNE, Derio, Spain, where he analyzes data from a wide variety of sources (microarray and HTS technologies included) and is also actively designing and developing web tools aimed to enhance the use of bioinformatic analysis pipelines for neophytes.