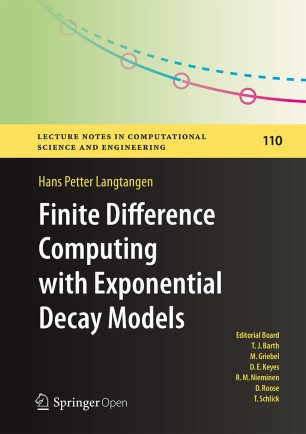 This text provides a very simple, initial introduction to the complete scientific computing pipeline: models, discretization, algorithms, programming, verification, and visualization. The pedagogical strategy is to use one case study – an ordinary differential equation describing exponential decay processes – to illustrate fundamental concepts in mathematics and computer science. The book is easy to read and only requires a command of one-variable calculus and some very basic knowledge about computer programming. Contrary to similar texts on numerical methods and programming, this text has a much stronger focus on implementation and teaches testing and software engineering in particular.

Hans Petter Langtangen is a professor of computer science at the University of Oslo. He has formerly been a professor of mechanics and is now the director of a Norwegian Center of Excellence: "Center for Biomedical Computing", at Simula Research Laboratory. Langtangen has published over 100 scientific publications and written several books, including papers and a bestseller TCSE 6 "A Primer on Scientific Programming with Python", now in its 4th edition. He has also developed open source and commercial software systems for computational sciences.

“This text provides an overview of the basics of scientific computing. … the author provides an excellent introduction to the field of scientific computing via a consideration of physically relevant models. … This text is an excellent tool for teaching and ideal for readers who would like to enter the field, or reinforce prior knowledge.” (Charis Harley, zbMATH 1356.65188, 2017)
PDF
EPUB