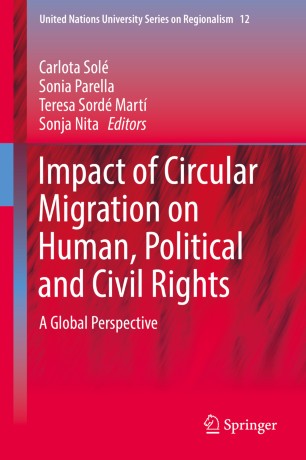 Impact of Circular Migration on Human, Political and Civil Rights

This volume addresses the topic of circular migration with regard to its multiple dimensions and human, political and civil rights implications from a global perspective. It combines theoretical and empirical studies and presents different case studies illustrating circular migration patterns and policies in different world regions. Circular migration processes – understood as the back-and-forth movement of people between countries and regions- form part of the changing nature of migration movements across the world at the beginning of the 21st century. Over the past decades, international, regional and internal migration flows have shown a quantitative increase and have changed in scope, context, origin and nature. Migration projects are every time more open-ended, multi-directional and flexible and often include some type of circularity. Instead of mere “push-pull-scenarios”, people migrate for many different reasons, including personal, family, professional, academic or political ones. In the 21st century migration journeys and the reasons underlying them are multiple and more diverse than ever before.

Carlota Solé, Emeritus professor of Sociology at the Autonomous University of Barcelona (UAB). The founder of the Group of Studies on Immigration and Ethnic Minorities (GEDIME), and currently the director of the Centre of Studies and Research on Migrations (CER-Migrations) both based at the UAB. She has published more than 38 books, 11 special issues in international and national journals and more than 200 articles on Modernization, Migration, Transnationalism, Ethnic enterprises, and Citizenship among many others. Solé was awarded with the CIS National Prize of Sociology and Political Sciences (1991) and the Mary Parker Follett Award from the American Political Sciences Association.

Sònia Parella holds a PhD in Sociology (2002) and is associate Professor in the Department of Sociology at the Autonomous University of Barcelona (UAB). She is the director of the GEDIME/CER-Migracions (UAB). Her current research focuses on the link between return migration and transnational mobility.  She has published on a wide range of issues including gender, migration and domestic work; ethnic entrepreneurship; transnational families; cross-border social practices in journals like Journal of Migration and Ethnic Studies, Revista Internacional de Sociología, Migraciones Internacionales, among others.  Parella has been a visiting scholar at the University of Princeton (USA), University of California-Irvine (USA) and at the Universidad Arturo Prat (Chile).
Teresa Sordé Martí, doctorate from Universitat de Barcelona (2004) and from Harvard University (2007), is a Serra Hunter associate professor at the Sociology Department in the Universitat Autònoma de Barcelona (UAB), and senior researcher at GEDIME-CER-Migracions. Her research work has focused on social inclusion and inequalities faced by migrants and ethnic minorities, particularly in the case of Roma, and the role played by Romani women. She has participated in different European Commission funded research projects (FP5 WORKALO, 2001-2004, FP6 INCLUD-ED, 2006-201, FP7 IMPACT-EV 1). Her work has been published in Qualitative Inquiry, Ethnicities, and European Journal of Women’s Studies, among others.
Sonja Nita is a former Project Researcher at UNU-CRIS in Bruges, where she focused on global and regional migration governance. She conducted a joint research project with UNESCO on the free movement of people within regional integration processes. Since February 2011, she coordinated a research project in cooperation with the Universitat Autònoma de Barcelona (UAB) in the framework of the United Nations University Institute on Globalization, Culture and Mobility (UNU-GCM).  Sonja is a graduate in Political Science and Law at the University of Hamburg and holds a Master´s degree in European Studies from the Center for European Integration Studies at the University of Bonn.