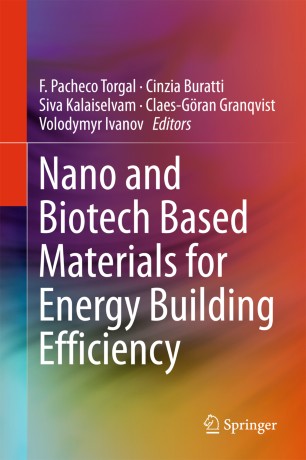 Nano and Biotech Based Materials for Energy Building Efficiency

This book presents the current state of knowledge on nanomaterials and their use in buildings, ranging from glazing and vacuum insulation to PCM composites. It also discusses recent applications in organic photovoltaics, photo-bioreactors, bioplastics and foams, making it an exciting read while also providing copious references to current research and applications for those wanting to pursue possible future research directions.
Derek Clements-Croome, Emeritus Professor in Architectural Engineering, University of Reading (From the Foreword)
Demonstrating how higher energy efficiency in new and existing buildings can help reduce global greenhouse gas emissions, this book details the way in which new technologies, manufacturing processes and products can serve to abate emissions from the energy sector and offer a cost-effective means of improving competitiveness and drive employment.
Maximizing reader insights into how nano and biotech materials – such as aerogel based plasters, thermochromic glazings and thermal energy adsorbing glass, amongst others – can provide high energy efficiency performance in buildings, it provides practitioners in the field with an important high-tech tool to tackle key challenges and is essential reading for civil engineers, architects, materials scientists and researchers in the  area of the sustainability of the built environment.

F. PACHECO-TORGAL is an Investigator at C-TAC Research Centre, University of Minho in Portugal. Authored almost 300 publications, 96 referenced in ISI Web of Science-WoS. Has a SCI Platinum h=30, the highest in the field of civil engineering in Portugal. Invited reviewer for 76 international journals for which he reviewed so far more than 260 papers. His review record places him at the Top 0.25% between more than 48.000 reviewers registered in Publons. Currently ranks 5th place between more than 900 engineering reviewers. Lead Editor of 14 books (11 already published and 5 being on the Master Book List of Web of Science) with more than 500 contributors from 52 countries in the five continents. Some of these books are available in all the libraries of the 10 most important Universities according to the Shanghai Ranking World Top 500 Universities. F.Pacheco-Torgal has practiced as a professional Civil Engineer during 10 years (1993-2003) during which he participated in building design projects and on-site supervision activities amounting to an excess of 49 million euros. Member of the Portuguese Board of Engineers since 1993, granted with the Senior title in 2003.

Dr. S. KALAISELVAM is the Head, Department of Applied Science and Technology, Anna University, Chennai. He obtained his Doctorate and  Post Graduate  degree from  Anna University, Chennai, and bachelor degree from University of Madras. He is a recipient of the  Active Researcher Award - 2013  by CTDT, Anna University from the Former President of India, Honorable A. P. J. Abdul Kalam, and Young Scientists award from  DST, Government of India, and IEI Young Mechanical Engineers Award  from the Institution of Engineers, India. He has published more than 50 articles in International Journals and presented more than 70 papers in National and International conferences. He also authored a Book in Academic Press (Elsevier) and contributed several  chapters in Books of International Standards.   His research interests encompass nanoscale and microscale heat transfer, nanomaterials, thermal energy transport, phase change materials, nanofluids and HVAC systems.

CLAES-GÖRAN GRANQVIST, born 1946, is currently Senior Professor of Solid State Physics at the The Ångström Laboratory of Uppsala University in Sweden. Granqvist’s research covers materials, mostly thin surface coatings, for energy efficiency and solar energy applications particularly in the built environment. The variable-transmittance “smart” window is one example, which also forms the basis of ChromoGenics AB, a company founded by Granqvist and collaborators and presently employing some 20 persons. He is member of The Royal Swedish Academy of Sciences and The Royal Swedish Academy of Engineering Sciences. In 2015, Granqvist received the Jan Czochralski Award for his lifetime achievements in Materials Science.

Dr. VOLODYMYR IVANOV has more than 40 years of teaching and research experience on Environmental, Industrial, and Construction Microbiology and Biotechnology in the universities of Europe, Asia, and USA. He is an author of 200 papers, patents, book chapters and 8 monographies. His textbook “Environmental Microbiology for Engineers”, Francis & Taylor, 1st (2010) and 2nd (2015) editions, was adopted for the graduate and post-graduate courses in the universities. His research experience includes the supervision and participation in the projects on biotechnologies with biofilms and biogranules, microbial transformations of iron, biocementation, bioclogging, and bioremediation of soil, microbiological monitoring of water quality.