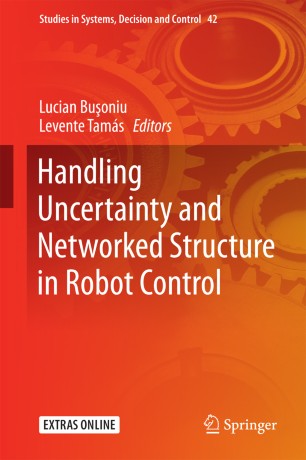 Part of the Studies in Systems, Decision and Control book series (SSDC, volume 42)

Each chapter features in-depth technical coverage and case studies highlighting the applicability of the techniques, with real robots or in simulation. Platforms include mobile ground, aerial, and underwater robots, as well as humanoid robots and robot arms. Source code and experimental data are available at http://extras.springer.com.

The text gathers contributions from academic and industry experts, and offers a valuable resource for researchers or graduate students in robot control and perception. It also benefits researchers in related areas, such as computer vision, nonlinear and learning control, and multi-agent systems.

Lucian Busoniu received the M.Sc. degree (valedictorian) from the Technical University of Cluj-Napoca, Romania, in 2003 and the Ph.D. degree (cum laude) from the Delft University of Technology, the Netherlands, in 2009. He has held research positions in the Netherlands and France, and is currently an associate professor with the Department of Automation at the Technical University of Cluj-Napoca. His fundamental interests include planning-based methods for nonlinear optimal control, reinforcement learning and dynamic programming with function approximation, and multiagent systems; while his practical focus is applying these techniques to robotics. He has coauthored a book and more than 50 papers and book chapters on these topics. He was the recipient of the 2009 Andrew P. Sage Award for the best paper in the IEEE Transactions on Systems, Man, and Cybernetics.

Levente Tamas received the M.Sc. (valedictorian) and the Ph.D. degree in electrical engineering from Technical University of Cluj-Napoca, Romania, in 2005 and 2010, respectively. He took part in several postdoctoral programs dealing with 3D perception and robotics, the most recent one spent at the Bern University of Applied Sciences, Switzerland. He is currently with the Department of Automation, Technical University of Cluj-Napoca, Romania. His research focuses on 3D perception and planning for autonomous mobile robots, and has resulted in several well ranked conference papers, journal articles, and book chapters in this field.