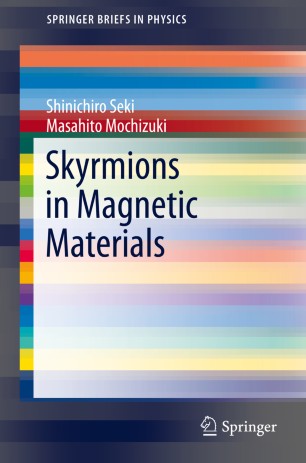 This brief reviews current research on magnetic skyrmions, with emphasis on formation mechanisms, observation techniques, and materials design strategies. The response of skyrmions, both static and dynamical, to various electromagnetic fields is also covered in detail.
Recent progress in magnetic imaging techniques has enabled the observation of skyrmions in real space, as well as the analysis of their ordering manner and the details of their internal structure. In metallic systems, conduction electrons moving through the skyrmion spin texture gain a nontrivial quantum Berry phase, which provides topological force to the underlying spin texture and enables the current-induced manipulation of magnetic skyrmions. On the other hand, skyrmions in an insulator can induce electric polarization through relativistic spin-orbit interaction, paving the way for the control of skyrmions by an external electric field without loss of Joule heating. Because of its nanometric scale, particle nature, and electric controllability, skyrmions are considered as potential candidates for new information carriers in the next generation of spintronics devices.