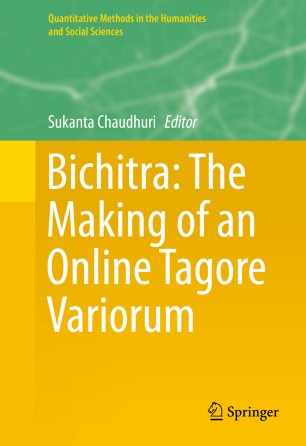 Bichitra: The Making of an Online Tagore Variorum

This book documents the creation of the Bichitra Online Tagore Variorum, a publicly accessible database of Rabindranath Tagore's complete works in Bengali and English totaling some 140,000 pages of primary material. Chapters cover innovative aspects of the site, all replicable in other projects: a hyperbibliography; a  search engine and hyperconcordance working across the database; and a unique collation program comparing variant texts at three levels. There are also chapters on the special problems of processing manuscripts, and on planning the website. Early chapters take readers through the history of the project, an overview of Tagore’s works, and the Bengali writing system with the challenges of adapting it to electronic form.

The name Bichitra, meaning "various" in Bengali, alludes both to the great variety of Tagore’s works and to their various stages of composition. Beyond their literary excellence, they are notable for their sheer quantity, the number of variant forms of a great many items, and their afterlife in translation, often the poet’s own. Seldom if ever has the same writer revised his material and recast it across genres on such a scale.​​ Tagore won the Nobel Prize in 1913.

By its value-added presentation of this range of material, Bichitra can be a model for future databases covering an author’s complete works or other major corpus of texts. It offers  vastly expanded access to Tagore’s writings, and enables new kinds of research including

computational text analysis. The “book of the website” shows in technical and human terms how researchers with interests in the arts, literature and technology can collaborate on cultural informatics projects.

Sukanta Chaudhuri, the editor of this volume, is Professor Emeritus at Jadavpur University, Kolkata, and  was Founder-Director of its interdisciplinary School of Cultural Texts and Records. He was Co-Ordinator of the Bichitra Online Tagore Variorum and General Editor of the Oxford Tagore Translations series. He is also a scholar of the European Renaissance and of textual and editorial theory.

About the project:
Bichitra was prepared in just over two years at the School of Cultural Texts and Records by a team of thirty project staff plus many specialist contributors and consultants. It was funded by the Ministry of Culture, Government of India, to commemorate Tagore’s 150th birth anniversary in 2011. The site is freely accessible, with apparatus in English, Bengali and Hindi, at
http://bichitra.jdvu.ac.in/