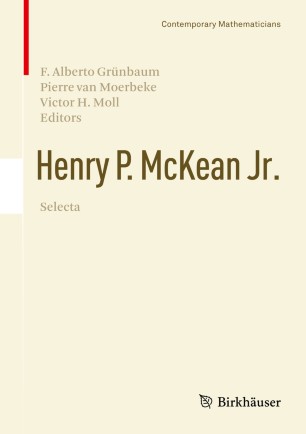 This volume presents a selection of papers by Henry P. McKean, which illustrate the various areas in mathematics in which he has made seminal contributions. Topics covered include probability theory, integrable systems, geometry and financial mathematics. Each paper represents a contribution by Prof. McKean, either alone or together with other researchers, that has had a profound influence in the respective area.

Pierre van Moerbeke received his doctorate at the Rockefeller University under the supervision of Henry P. McKean, went on to having positions at the University of Paris (Orsay), Berkeley and Stanford, before sharing his time between the University of Louvain and Brandeis University.

Alberto Grünbaum received his doctorate at the Rockefeller University under the supervision of Marc Kac, and then went on to having positions at the Courant Institute, Caltech and Berkeley.

Victor H. Moll received his doctorate at Courant Institute of New York University under the supervision of Henry P. McKean. After an instructor position at Temple University in Philadelphia, he joined the Department of Mathematics at Tulane University.