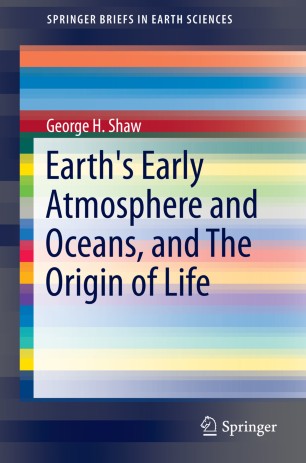 Earth's Early Atmosphere and Oceans, and The Origin of Life

This book provides a comprehensive treatment of the chemical nature of the Earth’s early surface environment and how that led to the origin of life,including a detailed discussion of the likely process by which life emerged using as much quantitative information as possible. The emergence of life and the prior surface conditions of the Earth have implications for the evolution of Earth’s surface environment over the following 2-2.5 billion years. The last part of the book discusses how these changes took place and the evidence from the geologic record that supports this particular version of early and evolving conditions.

As a graduate student at the University of Washington, Dr. Shaw focused on experimental geophysics, especially high pressure measurements of elastic properties. These studies continued through an NSF post-doctoral fellowship at Edinburgh, Scotland, at the Department of Geology and Geophysics at the University of Minnesota, and to a lesser extent after he took up a position at Union College. During his time at Minnesota Shaw was awarded an American Geophysical Union Congressional Science Fellowship. He spent the year working for a congressman from Washington State on energy and environmental issues, and particularly on the formulation and passage of the Nuclear Waste Policy Act of 1982. Dr. Shaw left Minnesota in 1988 to take up an endowed chair with the responsibility of restarting and developing a geology department at Union, a small private liberal arts college. At Minnesota he developed with a colleague a course in energy resources and policy, which we taught for about ten years and which he continued to teach at Union. About fifteen years ago Dr. Shaw initiated a course called “Great Moments in the History of Life” beginning with the origin of the universe and chemical elements and continuing through the Anthropocene. This revived an old interest in early Earth history and especially the conditions preceding and surrounding the origin of life. This book is the result of that revived interest.