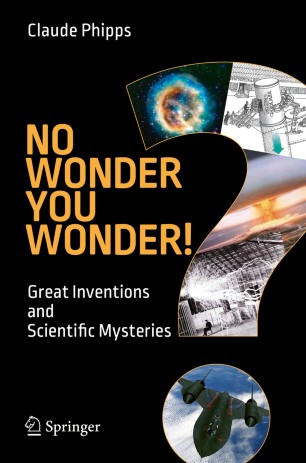 No Wonder You Wonder!

This book explores and explains scientific mysteries and principles, leavened with tongue-in-cheek humor and an abundance of illustrations. Chapters are short, but give an understanding of technology and science not available elsewhere. Questions include:

• What holds a satellite up while it goes around the Earth?

• Why is the sky (made out of clear air!) blue instead of green, or just black as night like the sky that high altitude jumper Felix Baumgartner saw?

• How is laser light different from “normal” light?

• Did Columbus really discover that the Earth is round?

• Which one invention will assuredly survive our civilization?

• Why can’t you travel back in time?

If you often feel embarrassed because you don’t have a clue about lasers, the difference between volts, amps and watts, or how jet planes really work – but you would like to understand the physical principles of our modern world, whether you’re a teen or a parent – this book is for you!

To understand the basics of quantum mechanics, or of protons, neutrons and electrons, you don’t need algebra, calculus,

or a lot of equations or technical buzzwords. Too many people have been soured on science by science teachers who have made simple concepts seem complex. This book is the antidote: all it requires is your curiosity.

Advance praise for No Wonder You Wonder!:

“From beginning to end, and with laugh after laugh, I en

joyed every single word of this remarkable book. Phipps is a hell of a good writer, and the kind of physics teacher that I would have loved as a young student. No Wonder You Wonder can be engrossing for anyone with a bit of curiosity, not just the scientific minded.” – Christophe Bonnal, Chief Engineer, CNES (French Space Agency)

“No Wonder You Wonder is a fa

ntastic book. Covering topics such as space, matter, and the energy within the universe, this book does an excellent job of clarifying these topics. It's a great read for young scientists and aspiring physicists.” – August R., high school freshman

Back in 1961, I decided on a career in science rather than history after hearing President Kennedy announce that we were going to the Moon. I am fascinated by all aspects of science, and a specialist in optics, plasma physics and laser-produced plasmas. I have B.S. and M.S. degrees from MIT and a Ph.D. from Stanford in electrical engineering, have worked in various National Labs for many years, and later formed my own company, Photonic Associates, in Santa Fe. While I am actually a “rocket scientist,” having designed and built laser driven plasma engines for spacecraft, I firmly believe that you don’t have to complete Grade 24 to understand how things work. Ernest Rutherford said “if you can’t explain your physics to a barmaid, it’s probably not very good physics,” and I agree with that sentiment. I want to help you get over your fear of numbers and science. Read this book and see if I’ve been successful!.

"Phipps’ new book is kind of a rarity in the Springer list, which specializes in very academic and technical subjects … . In the 331 pages, chock full of historical and contemporary prints, cartoons, photographs and charts and a number of illustrations by Friedelwolf Wicke, an Austrian collaborator, I could not find a dull moment in this compendium of instructive blurbs, insights, digressions and hard-won historical truths." (Roger Snodgrass, Los Alamos Daily Post, ladailypost.com, October, 2016)