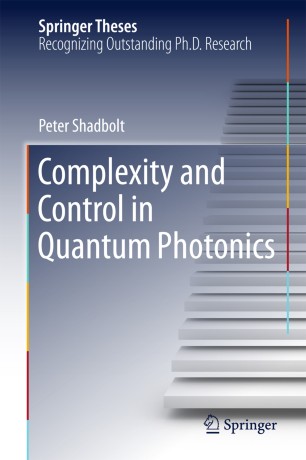 Complexity and Control in Quantum Photonics

This work explores the scope and flexibility afforded by integrated quantum photonics, both in terms of practical problem-solving, and for the pursuit of fundamental science. The author demonstrates and fully characterizes a two-qubit quantum photonic chip, capable of arbitrary two-qubit state preparation. Making use of the unprecedented degree of reconfigurability afforded by this device, a novel variation on Wheeler’s delayed choice experiment is implemented, and a new technique to obtain nonlocal statistics without a shared reference frame is tested. Also presented is a new algorithm for quantum chemistry, simulating the helium hydride ion. Finally, multiphoton quantum interference in a large Hilbert space is demonstrated, and its implications for computational complexity are examined.

Dr. Peter Shadbolt is a Postdoctoral Researcher in Controlled Quantum Dynamics at Imperial College, London. He completed his PhD in January 2014 at the University of Bristol, where he worked on experimental optical quantum computing using waveguides. Peter’s current research focuses on large-scale architectures for linear-optical quantum computing, as well as potential applications including quantum chemistry and machine learning.